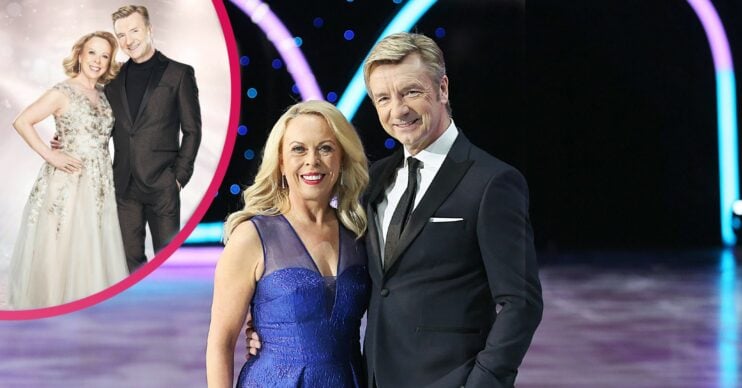 Did our favourite skaters share an intimate moment when they were teens?

Dancing On Ice is back for another exciting series and so are our favourite judges, Christopher Dean and Jayne Torvill.

The pair are thrilled to return to the panel and meet the new line-up of brilliant stars.

But what do we know about Christopher Dean and his rise to fame – and is it really true that he once kissed Jayne?!

Read on and we’ll tell you all we know.

Dancing on Ice judges: Who is Christopher Dean?

Christopher Dean is known for being part of a skating duo with Jayne Torvill.

The pair have been competing together since they were 14 years old.

They even went on to win an Olympic gold medal in the 1984 Winter Olympics.

Since then, Chris and Jayne have been judges on the popular ITV series Dancing On Ice and they’re excited to be returning again this year.

Born in Nottinghamshire, Chris (and Jayne) also won bronze at the 1994 Winter Olympics.

He started skating at the age of 10, after getting a pair of skates as a Christmas present.

And, before deciding to focus on skating as a career, Chris actually joined the police force, training as a cadet.

What is Chris expecting from the contestants this year?

Christopher is excited to be returning as a judge this year and this time his expectations are high.

He told ITV: “We have a high level of skill going into the show as a majority of them have found their feet and are getting more and more comfortable on the ice.”

The pro skater also revealed that because the standard is so high, the judges are going to be tough to impress this series.

When asked what gives him goosebumps, Christopher replied: “Something that’s daring and exciting and something that looks beautiful at the same time.”

The 62 year old has been married twice and is now in a long-term relationship with former Dancing On Ice co star Karen Barber.

Between 1991 and 1993 he was married to French-Canadian ice dance champion Isabelle Duchesnay.

After their split he married Jill Trenary in October 1994, with whom he shares two sons – Jack and Sam. The exes are still on good terms.

The DOI icon and Karen have been together since 2011 – and Karen has two daughters, Emma and Laura, from a previous relationship.

However, the pair stirred up a bit of controversy when they first started dating.

This is because they were spotted kissing in London just before Karen confirmed that her 21-year marriage had ended.

After lots of speculation, the couple confirmed their relationship, saying: “We feel the necessity to confirm that this year has seen a change in our relationship.”

They added: “But we are taking things slow, as it is early days.”

People have always falsely assumed that Chris and Jayne were dating.

Despite their closeness on the ice, the pair claim the lack of romance has allowed them to work together for over 30 years.

However,  something that Chris once said proves that their lack of romance might not be strictly true.

Read more: Dancing on Ice fans are all making the same complaint about Oti Mabuse as she joins the panel

Viewers were shocked after Chris revealed to Piers Morgan during 2013’s Life Stories that they had “dabbled” in romance as teens.

Christopher admitted: “We may have dabbled slightly.

“We sat on the back seat of one of those coaches. While she was asleep I may have kissed her – she knew nothing.”

Christopher carried on to say: “It’s unusual relationship that we have, and yet at the same time, of course, we love each other.

“You wouldn’t be able to do all that we do without love.”

Dancing on Ice is on Sunday evenings on ITV.