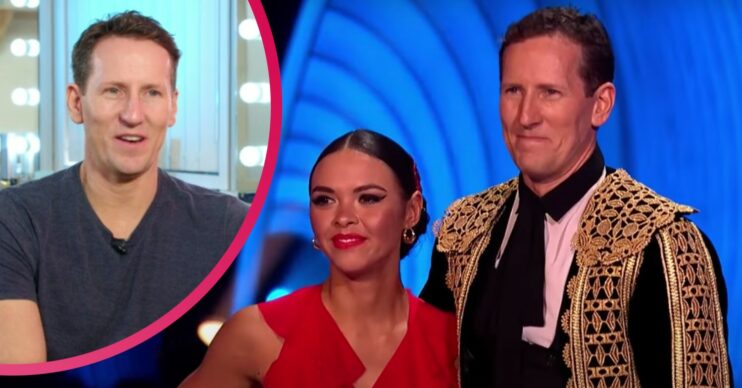 Dancing On Ice: Brendan Cole scoring under fire after ‘mistake’ in final

But were the judges right?

Dancing On Ice fans were left seething over Brendan Cole’s scoring by the judges in Sunday (March 27) night’s final.

But it was neck and neck in the early stages of the final. All three stars (and their skating partners) received perfect scores – 40 out of 40 – for their initial routines.

However, some viewers spotted a ‘fumble’ during Brendan and skate partner Vanessa Bauer‘s efforts.

What happened during Dancing On Ice star Brendan Cole’s routine?

The ‘error’ came as Brendan and Vanessa performed to Carmen by Bizet.

Vanessa was flipped over between the troupe of Dancing On Ice backing skaters and Brendan.

But her red dress seemed to get in the way – and even though Brendan caught Vanessa safely, it was perceived by some viewers to be a ‘stumble’.

Read more: Dancing On Ice fans all saying the same thing as this year’s winner is crowned

As the routine ended, host Phillip Schofield said: “One tiny, scary moment there.”

Brendan said: “Bit scary under there! We got through it.”

Nonetheless the judges were wowed by what they saw on the rink, awarding Brendan and Vanessa maximum marks.

But judge Christopher Dean seemed to suggest that was due to the supporting performers.

Some people watching at home pondered how Brendan and Vanessa could receive a flawless score for the routine.

One angry social media user fumed: “Ridiculous. Brendan makes a mistake and still gets top marks #DancingOnIce. This show has become so predictable.”

Another incredulous fan claimed: “#DancingOnIce Really 40 for Brendan! Are the judges watching the same thing I am? Two obvious mistakes. I’d have deducted at least half a point for each mistake/stumble.”

And another upset viewer tweeted: “Brendan makes a mistake and still gets a full set of 10s. What a joke #DancingOnIce.”

Others also suggested they regarded the marking a ‘joke’.

“Scores are farcical. Brendan stumbles yet still gets a 10. Judges pandering to him #DancingOnIce,” another viewer claimed.

Someone else complained: “Not fair to give 10s to Brendan, he had a stumble, wobbled and almost fell… #DancingOnIce #brendan.”

Another person added: “Brendan should have got 9s. He stumbled #DancingOnIce.”

However, others loved Brendan and Vanessa’s routine.

Another added: “Well done Brendan and Vanessa that was such an incredible routine and it’s a 10 from me.”