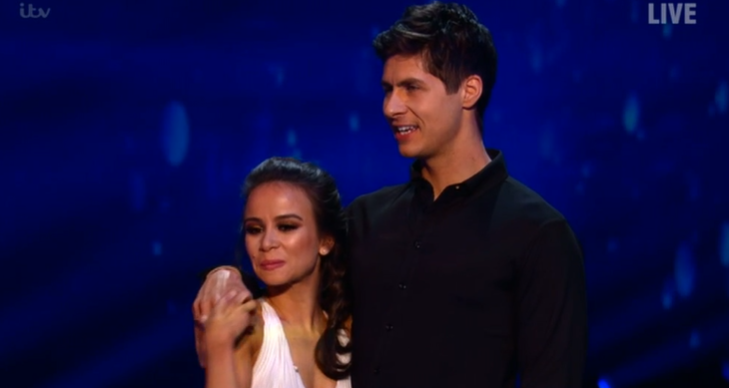 Dancing On Ice: Ben Hanlin is eliminated in the semi-final

He was in the skate-off against Libby Clegg

Magician Ben Hanlin has been sent home in the Dancing On Ice semi-final.

The 33-year-old narrowly missed out on a place in the final of the ITV ice-dancing competition, as he and his partner Carlotta Edwards were dumped from the competition on Sunday (March 1).

Ben and Carlotta faced the dreaded skate-off against Paralympian Libby Clegg and her partner Mark Hanretty.

It was so obvious Jayne and Chris would save Libby, they’ve shown favouritism to her through the whole series.

Ahead of the skate-off, Libby confessed she wasn’t disappointed to be performing her special routine – which marked her third week in the bottom two – because she had a “surprise” planned, which turned out to be the risky headbanger move.

The move involves the male skater spinning the female skater by her feet, whilst raising and lowering her so her head moves dangerously close to the ice.

Ben was the lowest scorer of the evening before the public vote, as he scored 37.5 for his first routine – which saw him complete the judges challenge of a 45-second solo skate.

He scored 37.0 for his second, personal skate, which was danced to Lightning Bolt by Jake Bugg in honour of his wife.

Libby, meanwhile, topped the leaderboard after the first routine, after judges were left amazed at her ability to skate solo despite suffering from Stargardt’s Macular Dystrophy – a disease which gives her only slight peripheral vision in her left eye – and being registered blind.

Viewers at home weren’t impressed with the result.

Many have slammed judges Jayne Torvill and Christopher Dean for ‘voting with their hearts’ and have accused them of ‘favouritism’.

What? Why are they “going with their heart”? Shouldn’t they be “going on the skate-off”? Ben is a lot better as a skater and performer. #DancingOnIce

2 professional skaters voting ‘from the heart’. It’s a skating show, they should know what the best skating is?? #DancingOnIce

#dancingonice so unfair on Ben. They all worked hard and should all have been judged on ability.

Gutted is Ben is out of the competition! It was so obvious Jayne and Chris would save Libby, they’ve shown favouritism to her through the whole series #dancingonice

Well that dance off was a complete fix. Speed and clean skate on the ice? Who are you kidding #DancingOnIce

Well as much as Libby is an inspirational person and she is there’s no doubt there I think Ben &Carlotta we’re robbed ….#dancingonice

Judges favourite put through rather than the better skater in the dance off . At least @JohnBarrowman voted the way everyone else was thinking . Sorry to see #ben and #carlotta go. #DancingOnIce

Fans had been pretty cross about Ben’s position on the leaderboard earlier in the evening, insisting the show was a fix.

The result of the skate-off means Libby and Mark will join Perri Kiely and Vanessa Bauer, and Joe Swash and Alex Murphy in the live final, which will take place next Sunday (March 8) at 6pm on ITV.