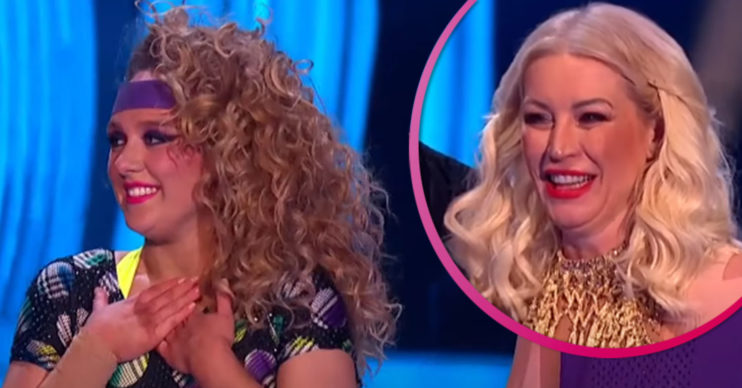 Dancing On Ice newbie Amy Tinkler has become a new favourite to win the show after replacing Denise Van Outen.

Denise was forced out of the competition last week due to a shoulder injury she suffered during training.

Now, it seems Amy has been tipped to win the series after receiving a good score from the judges on Sunday night.

She and professional partner Joe Johnson bagged 28 points out of 40 for their routine for Musical Week.

The star received a 7.5 from John Barrowman, 7 from Ashley Banjo and Christopher Dean and a 6.5 from Jayne Torvill.

Now, many viewers have predicted Amy could be a dark horse in the competition.

Meanwhile, one person compared her to Kelvin Fletcher as he won Strictly Come Dancing after replacing Jamie Laing.

They said: “Cannot wait for Amy Tinkler to pull a Kelvin and win this being a reserve choice.”

Cannot wait for Amy Tinkler to pull a Kelvin and win this being a reserve choice.

In addition, another wrote: “Amy the dark horse, calling it now!”

After that, a third added: “@amytinkler2 you were amazing on @dancingonice. I hope that you make it all way and win.”

cannot wait for Amy Tinkler to pull a Kelvin and win this being a reserve choice. #DancingOnIce #DoI

Who left Dancing On Ice on Sunday night?

Graham said: “I felt like we’ve got a lot more, technical skating and good skating, but hey-ho.

“I think I will use [the skating] in the future. I’m not going to quit skating.”

Viewers were divided, with many saying they thought Rebekah should have been voted off.

One wrote: “@skigrahambell you were robbed. Loved your skate off. I had a tear in my eye too.”

After that, another added: “Once again there is clearly an agenda going on here. Vardy should be going home! Graham was robbed!”

In conclusion, a third tweeted: “Graham was robbed! He’s a better skater than Rebekah.”

Who is your winner? Leave us a comment on our Facebook page @EntertainmentDailyFix and let us know.