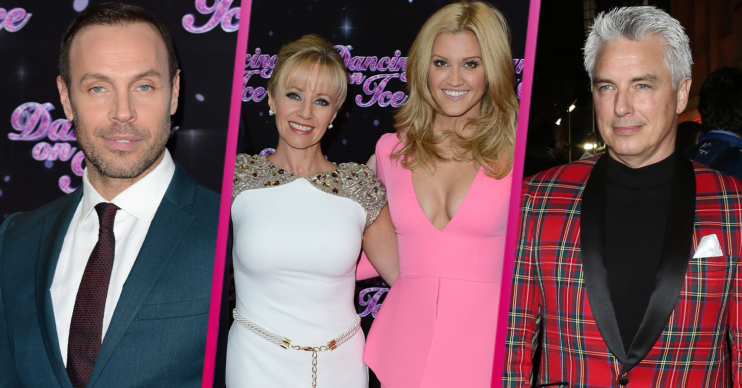 Dancing on Ice: All the judges in the show’s history – and the ones who left under explosive circumstances

So many rows over the years…

Dancing on Ice is back for a new series – with judges Jayne Torvill, Christopher Dean, Ashley Banjo and Oti Mabuse sitting on the show’s ice panel.

Hosted by Holly Willoughby and Phillip Schofield, the second batch of celebrities will take to the ice on Sunday (January 23), hoping to impress the judges.

However, over the years the ice panel has gone through a number of changes, most recently with John Barrowman’s exit.

Here, we run down all the judges in Dancing on Ice history – and the sometimes explosive way they left the show.

Dancing on Ice judges: Who are the current panel?

Oti joined this year, while Ashley, Jane and Chris joined the panel back in 2018.

For the previous nine series, Jayne and Chris acted as mentors for the celebrity contestants.

They both now jointly hold the position of head judge.

Former competitive figure skater Robin Cousins was head judge on the show from the outset.

He remained with the show until it was cancelled after nine series in 2014.

But when the show returned four years later in 2018, Robin didn’t.

However, there’s clearly no bad blood as he’s still a huge fan of the show.

When it returned in 2018, he said: “I love the fact it’s getting such high viewing figures.

“One moment it’s glory and the next it’s catastrophe. It’s great entertainment and nice that figure skating is being seen that way again. I had a great time on the show.”

Karen was another of the original judges, staying on the show till 2011, when she became head coach until the show was axed.

However, her time coaching the celebrities wasn’t without controversy.

When Karen disagreed with Jason’s critique, he told her: “If your opinion mattered you’d still be on the judging panel.”

She stormed over and demanded that he repeat what he’d just said – with a then heavily pregnant Holly Willoughby having to step in!

Karen is now in a relationship with Christopher Dean, after she split from her husband of 21 years.

At the time, she said: “It was hardly a scandal, was it? We were both separated and middle-aged, and got together after knowing each other for 30 years.”

Karen was reinstated to the ice panel in 2013, also appearing on the 2014 series.

Her old rivalry with Jason reared its ugly head again, with the judge implying that she was only back because of her romance with Chris.

Karen didn’t return with the show in 2018, but she is often seen working as a mentor with the celebrity contestants.

The panel’s Mr Nasty made his debut on the first episode of the show in 2006, staying on the ice panel till 2011.

When it returned in 2018, Jason made his comeback too – but only for two series.

In August 2019 – after a huge on-air spat with Gemma Collins, during which she accused him of “bullying” – he announced he was quitting the show.

“After all these years I feel it’s time for me to say goodbye to my judging role and return to things I have been putting on hold and have been on the back burner for a while.

However, could he about to make a comeback to the ice panel?

Fans of the show most certainly hope so!

Former ice dancer Nicky joined the show in 2006, staying till 2010 – and returning for a one-off appearance in 2014 when Robin was off working on the Winter Olympics.

He’d previously skated professionally with Karen, but that didn’t stop the pair coming to blows on the show.

In 2008, the pair had a blazing row over his low marks for contestant Suzanne Shaw.

Nicky said: “Karen coaches the celebrities and spends a lot of time with them, so I think she gets too emotionally involved, whereas I find it easier to stay subjective.”

Choreographer Karen joined the panel for one series only in 2006, being replaced by Natalia in 2007.

The Russian skater also stayed for just one series.

She occupied a seat on the judging panel in 2012, alongside Louis Spence.

However, she most certainly commanded attention during her time on the show with her cleavage-flashing dresses.

Chatting on This Morning at the time, she said: “And the thing is when you wear those dresses and you try them on in the dressing room you are standing up.

“But when you sit down, everything slides down a little further so I should’ve watched it and I’m watching out now.”

She added: “I hope they still listen to me about what I have to say and they don’t just look at the dress.”

However, with her background in musical theatre and not ice skating, her run was marred by controversy.

At the time she said: “You’ve got quite a few people on the panel who are experts on the skating and I just don’t think it only comes down to that.”

After she left, she returned to the role of Roxie Hart in the musical Chicago.

She also did I’m A Celebrity in 2020 – the first time it took place in Wales.

Of course, she courted controversy there too, revealing she’d slept with Prince Edward at Buckingham Palace!

However, despite professing that she “loved” working on the show, she didn’t return in 2012.

Instead, Emma said she was prioritising the “other exciting projects” the year would bring.

Of course, this included a Spice Girls reunion at the closing ceremony of the London Olympics.

The bubbly blonde joined the panel in 2013, sticking around till it went off air in 2014.

Ashley’s appointment came months after her stint on I’m A Celebrity, where she finished as runner-up at the end of 2012.

After the show went off air, Ashley’s presenting career continued to thrive.

She landed a spot on Ant & Dec’s Saturday Night Takeaway and now works on the Heart FM breakfast show.

The Torchwood star joined the panel in 2020 after having been a contestant on the very first series of the show back in 2006.

He returned in 2021, but generated a lot of newspaper headlines in the wake of the Noel Clarke scandal.

Read more: The biggest-ever scandals and most explosive fall-outs in Dancing on Ice history

They didn’t bring him back this year, replacing him with Oti.

A statement from ITV said: “We thank John Barrowman for two brilliant years on the Dancing On Ice panel.”

One-off appearances on the show have also seen Michael Ball and Angela Rippon sit temporarily on the judging panel.