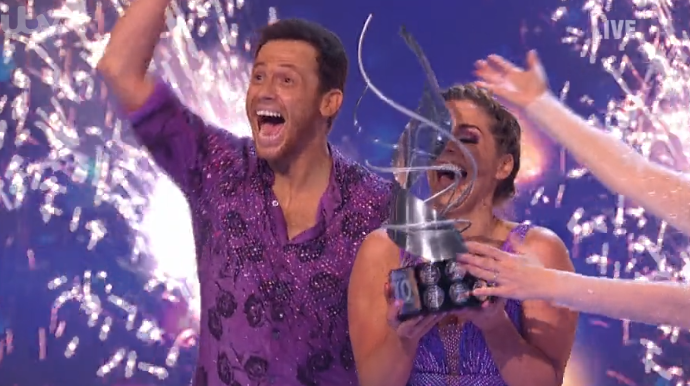 Dancing On Ice: Just 1% between Joe Swash and Perri Kiely in final votes

The Dancing On Ice voting left just 1% between Perri Kiely and Joe Swash in Sunday night’s (March 8) final. The pair found themselves as the final two in the figure skating competition at the weekend and ITV has revealed the results were incredibly close with the full breakdown. Champion Joe – who won the […]

The pair found themselves as the final two in the figure skating competition at the weekend and ITV has revealed the results were incredibly close with the full breakdown.

Champion Joe – who won the trophy alongside his pro partner Alex Murphy – was victorious with 50.53% of the vote, while runner-up Perri and his partner Vanessa Bauer received 49.47%.

Earlier in the evening, it was still very close between the two, with the 38-year-old actor leading with 43.20%, while the Diversity dancer had 41.48% and third placed Libby Clegg having just 15.31% before her exit.

Perri was gracious in defeat over the weekend, describing the winner as his “brother” and insisting he did “everything” he set out to do on the show.

He said: “I honestly feel like I’ve done everything I’ve wanted to. Joe has come so far and I’ve genuinely made a friend for life in Joe. Like, he’s my brother.”

Meanwhile, Joe insisted he couldn’t have even reached the final without the support of Libby – who is a Scottish Paralympic sprinter who is registered blind – and Perri because they supported him at every stage of the competition.

The former EastEnders’ star – who is in a relationship with Stacey Solomon – said: “It’s been the craziest journey, it’s been so long, I think we’ve been doing it since September. I can remember spending days and days just trying to push off straight, it’s all a bit surreal to be honest.

“I couldn’t have got that far without them two. Whenever I had a judges challenge or something I thought I couldn’t do I just remembered Libby was there and Libby can’t see, and she never moaned about anything.

“She was my inspiration.

“Perri is an old head on young shoulders, he’s so mature and he’s got such a great soul.

I was just glad to be in the final with them.

“Even though I was old enough to be his dad when I would go through my problems he’d say, ‘Joe this is what I think you should do.’

“They really helped me I was just glad to be in the final with them.”