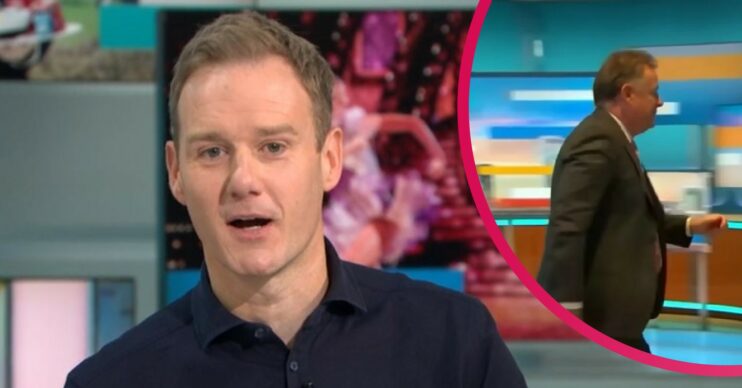 The 45-year-old reenacted Piers’ infamous storm-off set during his interview on the show.

He is now set to host 5 News on Channel 5 – as well as a host of other, non-news-related shows.

As well as talking about his new gig at Channel 5, Dan also took the opportunity to take a swipe at Piers.

Fans of the pair know that they have a lighthearted feud between them – and Dan’s actions on the show was just another example of it.

It wasn’t until towards the end of the interview that Dan mocked ex-GMB host Piers.

As Richard wished Dan luck with his new job, Dan took the opportunity to take a swipe at Piers.

“Right, I’m going to do what they normally do on this programme and walk off,” he said.

He then stood up and started to walk off set.

“I’d just like to point out only one person has ever done that but it is a stage that has been set for you,” Susanna said.

Piers responded to Dan’s behaviour on GMB, tweeting today: “He couldn’t even do this better than me…”

Dan recently opened up about his and Piers’ relationship, shedding some light on their so-called feud.

The 45-year-old spoke about the ‘feud’ during an interview with the Daily Mail’s Weekend magazine.

“I went to his 50th birthday party some years ago, but I’m not sure he would say we’re friends now,” he said.

“I enjoy spending time with him, but we’re completely different in the way we go about stuff,” he continued.

“He has a certain style of broadcasting I would feel very uncomfortable doing, but it works for him.”

Dan then went on to say that he wouldn’t “spin” a story or “over-egg it” – implying that this is what Piers does.