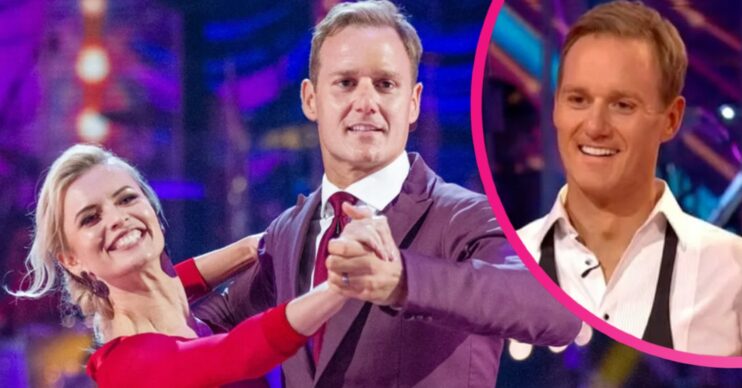 The BBC Breakfast host is making a comeback

Dan Walker is set to return to Strictly Come Dancing this weekend alongside partner Nadiya Bychkova.

The BBC Breakfast presenter is making his way back to the ballroom for a special group routine during the final.

Taking to social media yesterday (December 14), Dan teased the performance as he reunited with Nadiya for rehearsals.

Back in the training room for the #Strictly final.

Lovely to catch up with everyone and I hope you enjoy the group dance 🕺🏼💃🏼@NadiyaBychkova pic.twitter.com/E2S16gb1vy

Dan Walker to return to Strictly

Alongside the post, Dan penned: “Back in the training room for the #Strictly final.

“Lovely to catch up with everyone and I hope you enjoy the group dance.”

He continued his message in a video alongside pro partner Nadiya.

We’re back in the studio today!

Dan added: “We’re back in the studio today. We’ve been preparing for the Strictly Come Dancing final this Saturday.”

The host went on to explain they were practising for the show’s upcoming group dance.

“Everyone gets to do a bit of their favourite dance from the series,” he added.

Dan and Nadiya then revealed the routine will include their Cha-Cha to U Can’t Touch This by MC Hammer.

Meanwhile, the star also spoke about the upcoming routine on BBC Breakfast.

Appearing on the programme with Sally Nugent, Dan shared his excitement over returning to the show.

“Yes, I’m back in. I’m in the final,” he shared, adding: “We’re doing our group dance for the final, so we had to rehearse it yesterday.”

Strictly fans rushed to comment on the news, with one saying: “I’m sooo happy you’re doing MC Hammer again! It was my favourite dance of yours and I always watch it when I need cheering up.”

A second tweeted: “Love this! Great to see you both again.”

Dan hits back at ‘curse’ rumours

It came after the pair were reportedly spotted hugging backstage.

However, Dan – who is happily married to wife Sarah – insisted that nothing is going on.

He told The Sun: “I just needed to give somebody a hug. I needed to release emotionally from everything I’d been bottling up in the week.

“Nadiya was great. She said nice things, and I felt a lot better.”

Dan and Nadiya were eliminated from the show during the quarter-finals.