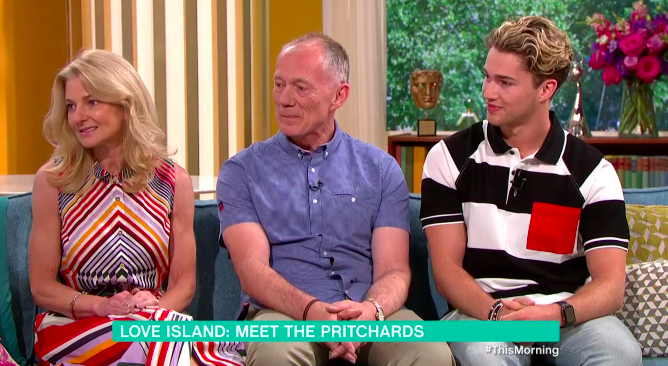 She's got the thumbs up!

Curtis Pritchard’s fledgling romance with Maura Higgins has been given the seal of approval from his famously protective family.

Curtis’ brother AJ appeared on This Morning on Thursday (July 11), alongside his mum Debi and dad Adrian, and explained why they believe the pair are a good match.

Read more: When is the Love Island 2019 final? ITV2 finally confirms when show will crown winners

His mother even became emotional when she relived her son’s time in the villa, and went on to describe how Maura had put a sparkle back into her son’s eyes.

Joining Phillip Schofield and Holly Willoughby on the sofa, Strictly professional AJ said: “I think she’s great for him. That smile that we all love of Curtis’ came back last night, definitely.”

Mum Debi added: “I think we got to see a bit of the real Maura when she got very, very nervous around Curtis, which Molly-Mae picked up on… Last night, I’ve never laughed so much.”

Opening up about Curtis’ previous relationship with Amy, which it’s fair to say ended in tears, mum Debi said: “I think initially, truly, both Curtis and Amy, it was real. Every second of those four weeks was real.

“And the bubble was there. Amy’s friendship grew, and grew, and grew. And then, when the bubble burst because of Casa Amor, Curtis was out of the bubble and stopped to think ‘maybe Amy’s relationship was going at a faster rate than mine’. And he questioned it. And then it went all crazy.”

AJ, in turn, spoke about his brother’s honesty, which can sometimes get him into trouble…

He said: “For me, I think, Curtis is Curtis. He is so honest, sometimes a little bit too brutally honest the way he let her down.

“But the thing is, he was on holiday getting sunburned, eating too much and everything is done for him so there was that holiday romance.

“Then when he went into Casa Amor, it gave him the chance to act relaxed, give himself a bit more time to think and the opportunity actually was maybe, ‘I’m not feeling the same amount of love for Amy that maybe Amy was’. But he could’ve let her down a bit softer.”

He went on to admit that Curtis always “wears his heart on his sleeve”, adding: “He doesn’t process things, he just does them… Honesty is definitely the best policy and that’s what he definitely did.”

Mum Debi continued: “Curtis has only had one relationship, which was his dance partner. So they were both sort of innocent of the pain of relationships…

“I was so proud of him because he knew both on the inside and the outside, his popularity would decline for showing that he wasn’t playing a game. It was real.”

AJ went on to insist that if Curtis was playing a game, as some critics have suggested, he would have just “stuck with Amy and looked perfect and won it and then left and then it would’ve all gone a bit sideways”.

During the ‘dirty dancing’ task on Wednesday night (July 10), Maura and Curtis proved they had a real chemistry when both managed to raise each other’s heart rates the most.

Curtis was originally coupled up with Amy, but she left the villa after he ended their relationship.

This Morning weekdays at 10.30am on ITV

Do you think Maura and Curtis are meant to be? Leave us a comment on our Facebook page @EntertainmentDailyFix and let us know what you think!