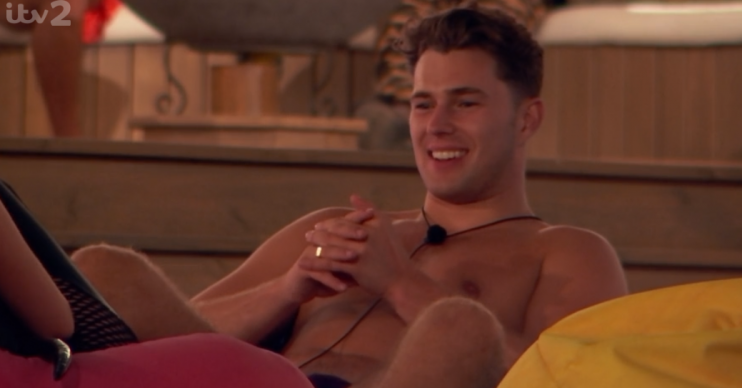 Viewers accuse the dancer of 'playing girls off each other'

Last night’s recoupling in the Love Island villa saw Maura and new girl Francesca vying for the affections of one man – Curtis Pritchard.

In the end, Francesca was the one who got to couple up with the professional dancer, 23, being the last girl to enter the villa, and therefore the first to choose a partner.

However, judging by the teaser for tonight’s episode, we haven’t seen the last of this particular rivalry, as Curtis was seen flirting with both women.

And the trailer left a sour taste in viewers’ mouths, with the hunky contestant being labelled “vile” and a “snake”.

It was only a couple of days ago that we saw Curtis in tears over Amy Hart’s decision to leave the villa.

But if the teaser in last night’s programme is anything to go by, he’s got over it pretty quickly.

It first showed him chatting with Francesca on the sofa. After the brunette asked him if he was happy with the result of the recoupling, he admitted that he was pleased he could get to know her.

However, the clip soon cut to him having a one-to-one with Maura, and he seemed to be engaging in flirtatious banter with her, too.

Viewers at home couldn’t believe what they were seeing, and wasted no time in having a dig at Strictly dancer AJ’s brother on Twitter.

One spat: “Curtis is vile. Can’t believe Amy left for him to be happy, only for him to immediately show his REAL colours.

“Playing girls off against each other like that. Lucky escape girl, lucky escape.”

Another quizzed: “Anyone else starting to think Curtis is a bit of a snake?”

And a third viewer added: “Sorry, but is it just me who’s going off Curtis? He’s really acting like a player and I’m not here for it.”

For the record, footballer Marvin Brooks, who got booted off the show last night, reckons that the Curtis-Francesca-Maura love triangle is far from finished yet.

After leaving the show, he said: “I feel Francesca is more Curtis’s type, and I think their romance will blossom.

“But it won’t happen easily because Maura will definitely have her say in the matter.”

Love Island is on ITV2 tonight at 9pm.