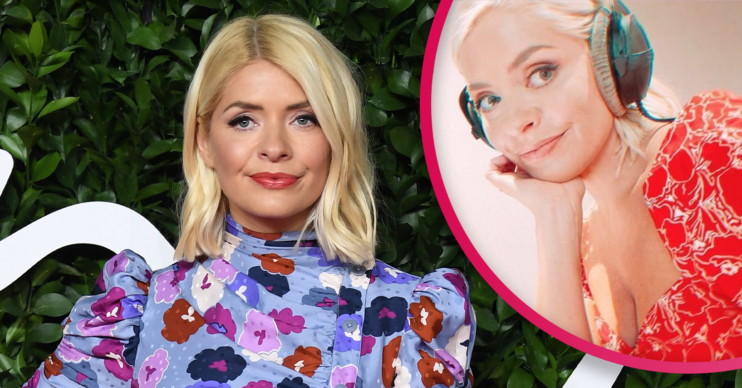 The TV presenter previously had nodules on her voice box removed

Holly Willoughby has opened up about an old medical condition and how it can still affect her day-to-day life as she recorded the audio version of her book Reflections today (September 14).

The This Morning presenter raced straight from the studio to a voiceover booth, stopping en route to change into a pretty red dress.

And, ahead of recording her audio book, Holly let fans into a secret about a previous health condition.

What did Holly Willoughby say about her health?

Before she started recording, Holly revealed the bits and pieces she’d taken with her to make the afternoon go smoothly.

She said: “Well I’m here in a voiceover booth, there’s my mic, there’s my headphones. I am reading my book for the audio book.”

Holly added: “I’ve got hot water, I have got Vocalzones because I’ve got bit of an ugh,” gesturing to her throat.

How does Holly look after her voice?

The presenter went on to explain why.

And we’re guessing it may well impact her day-to-day work on This Morning, where she talks to co-host Phillip Schofield and their guests for two and a half hours a day.

Read more: This Morning fans left distracted as they claim to spot Holly Willoughby’s ‘black knickers’ at the NTAs

“I had nodules years ago and when I talk too long I start to get strained,” she said.

“I’ve got this steamer which looks like I’m vaping in the voiceover booth but that’s the magic stuff,” Holly said as she breathed in the steam.

“So let’s do this,” she concluded.

Holly had an operation back in 2018 to remove the nodules from her voice box.

At the time, she said: “Phew! Nodules gone, operation a success.”

Holly admits to feeling ‘reflective and hopeful’ as she records Reflections

Holly also shared moments from the voiceover booth on her Instagram grid.

Admitted she was feeling “reflective and hopeful”, Holly said: “Spending a dreamy afternoon recording the audiobook of #reflections…

“I listen to a lot of audio books… you are my people!

“To be able to listen to what’s between the pages and be on a walk, cooking dinner, stuck in traffic is such a joy.

“Somehow when a book is read by the author it brings it even more to life… not long to go now,” she said.

So will you be reading Holly’s new book Refections? Tell us on our Facebook page @EntertainmentDailyFix.