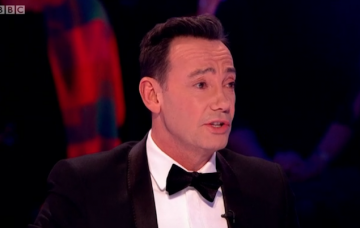 Judges, contestants, fans - there wasn't anyone he didn't rile up

Last night’s glittering Strictly Come Dancing finale won by Stacey Dooley and Kevin Clifton has been hailed as one of the best in recent years.

Millions of TV viewers were dazzled by incredible performances from the winning pair and their fellow celebrity finalists Ashley Roberts, Faye Tozer and Joe Sugg.

But among all the highlights, it seems judge Craig Revel Horwood was given a universal thumbs down for his role on the show.

Not only did his scoring of Stacey and Joe come under fire from fans on social media, he was also shaded by his fellow judges for comments made earlier in the series.

And while Kevin slammed the 53-year-old for denying him and Stacey a perfect score for their show dance, viewers were left wondering what they and Joe and his partner Dianne Buswell had to do to rack up 40 on the leaderboard.

Furious viewers vented on social media, with many believing Craig was in favour of Faye or Ashley winning.

He was also accused by some observers on Twitter of ‘robbing’ Stacey and Joe with his marking.

“Watching Strictly & am so fed up with how much of a biased, sour faced man Craig Revel Horwood is, with his votes & smiles kept just for his favourite(s),” raged another.

A third said: “My last word on strictly 2018 joe and stacey were both robbed of perfect 40s the only person we should be mad at is craig revel horwood.”

Several fans went on to say they had reached their limit with the tough judge.

Another added: “I like Craig Revel Horwood but his personal feelings have interfered with his professionalism in this series of Strictly. When that happens you no longer have credibility. Time to exit. Stage left.”

Shirley Ballas also made it clear she had not been impressed with Craig’s comments when she brought up how her advice to Faye earlier in the series had been dismissed.

Quoting Craig’s words from week two of the competition without directly naming him, the head judge told Faye she was glad she had ignored his suggestion not to listen to Shirley’s direction about technique.

She said, passionately: “So, I felt you listened to me and I felt you worked on the technique and you cannot be a winner in anything whether it’s singing, drama, acting, dancing unless you have technical base underneath your body, and you have that! You were amazing.”

Bruno Tonioli also took a dig at Craig’s criticism of Joe’s ‘shaping’ in his Paso Doble.

But perhaps most frustrated of all was Kevin.

Stacey attempted to laugh off Craig’s score of 9 – when his fellow judges all voted 10 – by joking she wouldn’t be coming to his party she’d promised to attend.

Kevin, however, got fired up as he reflected on how Craig’s scoring has prevented him from getting 40 before now.

Having reached the final before, Kev said: “He does it to me every final, I expect it from Craig. Every final.

“One day I’ll impress you, Craig, every year.”