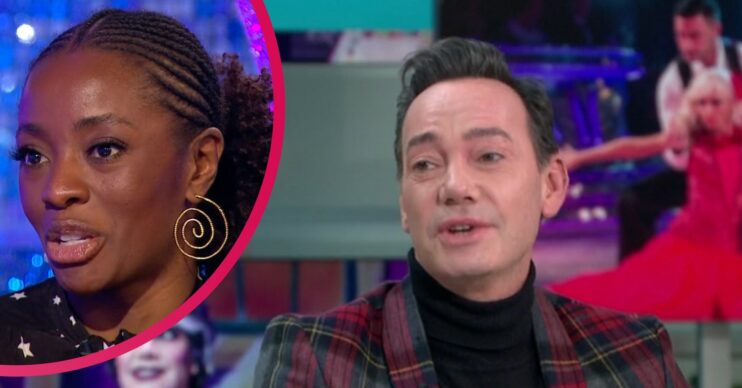 We are too, Craig!

Craig Revel Horwood has given Strictly fans an update on AJ Odudu and her injury during an appearance on Good Morning Britain today.

The 56-year-old judge has also revealed that he’s “hoping and praying” that presenter AJ will be recovered in time for Saturday’s final.

Strictly finalist AJ Odudu revealed yesterday that she has picked up an injury just days before Saturday’s final. The 33-year-old told Newsbeat on BBC Radio 1 that she has ankle ligament damage.

“I literally am on crutches at the worst possible time,” she said.

During an emotional appearance on It Takes Two last night (Wednesday, December 15), a tearful AJ went into more detail about her injury.

“I’m upset because I’ve suffered an injury, don’t know when it happened, but essentially, I’ve got issues with my joints,” she said.

The Strictly star revealed to host Janette Manrara that she currently isn’t able to stand on her right leg or stand up without her crutches supporting her.

However, AJ said that she is remaining hopeful to be recovered enough to perform on Saturday.

What was Craig Revel Horwood’s update?

But, before the judge could discuss his new panto show, he was asked by the GMB hosts for updates on AJ Odudu’s injury.

“What’s happening with AJ?” GMB host Ben Shephard asked. “Is she going to make it?”

“Well, we’re keeping our fingers crossed,” Craig said. “I spoke to the Beeb this morning about it and it’s ligaments.”

Craig then went on to say that AJ had had treatment for her injury yesterday (Wednesday, December 15).

“She thinks she’s going to be able to get through it,” he continued.  “And like any sportsperson, you soldier on.”

What else did Craig Revel Horwood say?

Craig went on to speak about how unlucky AJ was to pick up the injury so close to the final.

Ben and Charlotte Hawkins then asked Craig how AJ had actually injured herself.

“Is it just wear and tear? Or did she twist her ankle or go over it?” Ben asked.

“No, I think she just went over on it,” Craig confirmed. “And then, you know, hurt the ligament.”

Craig then spoke about his own experiences with injuries when performing. Craig told the GMB hosts that he’d had an injury with his shoulder once, but an injection had helped him get through the performance.

The Strictly judge said recovery for AJ was possible, though. “Let’s just wait and see,” he said.

“I’m hoping, I’m praying because she is so good and I will really miss her if she’s not there,” he confessed.

Should AJ recover enough to perform, she’ll be facing John Whaite and Rose Ayling-Ellis in Saturday’s final. The celebrities’ fates will be left in the voting public’s hands, as they battle it out for the famous Glitterball trophy.

The Strictly final is on Saturday, December 18 at 7pm on BBC One and BBC iPlayer.

What do you think of  Craig Revel Horwood’s update? Head to our Facebook page @EntertainmentDailyFix and let us know.