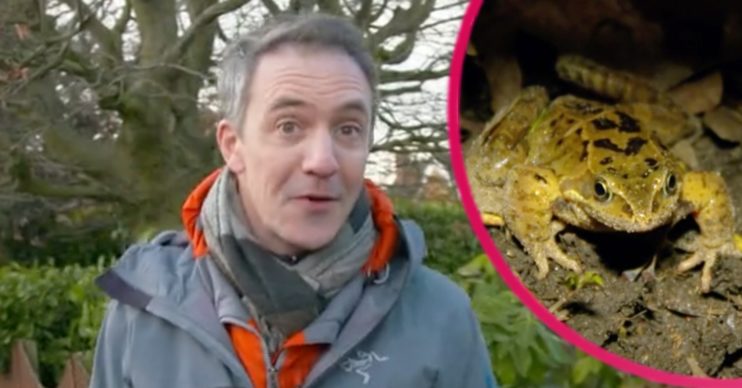 Some viewers couldn't stomach the scene

Countryfile viewers were left shocked after a toad was dissected pre-watershed on last night’s show (March 28).

During the BBC programme, Joe Crowley appeared in Bedfordshire to find out about a new national DNA database for toads.

However, at one point, an autopsy became too much for some fans.

What happened on Countryfile?

Ahead of the autopsy, Joe explained: “At this time of year, large numbers of common toads have woken from hibernation in winter hideaways and now need to head back to the pond, in order to breed.

“There are many perils en route, but crossing busy roads is perhaps the greatest.”

He then joined a group of “toad patrollers” in Bedfordshire, who were trying to rescue the toads after hibernation.

Although the volunteers managed to save some toads, others weren’t so lucky.

Joe added: “We found two dead toads in the road, so that’s not what we were hoping for of course.

“The only positive to come out of it is that Remy and Simon can now take a DNA sample, and that will help inform their understanding of this toad population.”

The show then cut to a toad being partially dissected by Remy and Simon.

However, some viewers found the scene distressing.

Another sarcastically wrote: “I’m glad we just got to see a toad autopsy up close #Countryfile.”

In addition, a third added: “I’m having bad mental health time right now. I just walked into the front room and they’re dissecting a frog on Countryfile and I cried thanks.”

A fourth joked: “Remy, just dissect off a couple of legs for ‘research purposes’ #Countryfile.”

However, others praised the “toad patrol” volunteers.

One said: “Hurrah for the toad patrol!”

I’m glad we just got to see a toad autopsy up close #countryfile pic.twitter.com/vtcTOGb0f8

I’m having Bad mental health time rn and I just walked into the front room and they’re??? dissecting?? a frog on countryfile and I cried thanks

Meanwhile, it comes weeks after host Ellie Harrison broke down in tears after saving a baby lamb on the show.

During a recent episode, Ellie, 43, and her co-star, Adam Henson, helped to deliver a lamb after it became stuck.

Adam had to reach and push a lamb back inside the womb, so another could come out.

But things got even worse when the mother appeared to reject her baby.

Ellie began crying, saying: “Oh my god, I feel really choked by that. It was just so stressful.”

Following the emotional scene, viewers at home praised the star for bravely handing the situation.