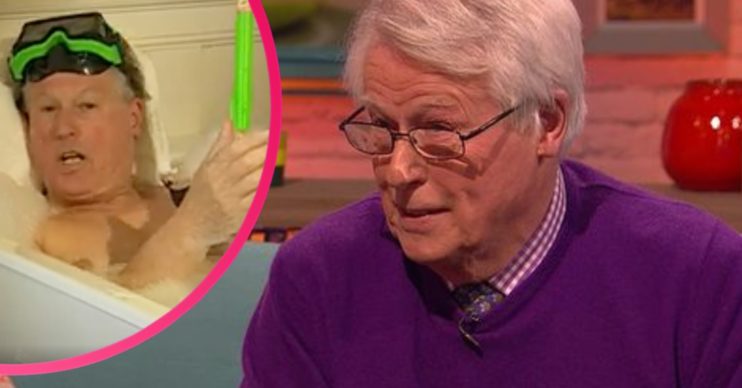 BBC viewers were not expecting this

Countryfile viewers got the shock of their lives during the latest episode.

The popular BBC one programme is known for its wholesome content and family friendly tone.

So when John Craven appeared in his birthday suit, it took viewers by surprise.

The most recent episode was called John Craven’s Best of Britain.

What did John Craven do on Countryfile?

He’s been working on TV for over half a century, and to celebrate the show featured a montage of old clips.

One in particular caught the attention of those watching at home.

It featured John in a bubble bath, playing with a rubber duck and wearing a snorkel.

Viewers quickly raced to Twitter, with some suggesting the throwback clip was a little much.

“Oh good Lord. Crave in the bath. I cant unsee that. #BrainBleach,” tweeted one fan.

While a third viewer said: “Ok Crave calm down! #Countryfile”.

John first joined Countryfile all the way back in 1989, just a year after it first hit screens.

The show has since gone on to become one of the BBC’s most beloved series.

Viewers were left shocked in March after a toad was dissected pre-watershed.

During the BBC programme, Joe Crowley appeared in Bedfordshire to find out about a new national DNA database for toads.

Joe explained: “We found two dead toads in the road, so that’s not what we were hoping for of course.

“The only positive to come out of it is that we can now take a DNA sample, and that will help inform our understanding of this toad population.”

Another wrote: “I’m glad we just got to see a toad autopsy up close #Countryfile.”

While a third added: “I’m having bad mental health time right now. I just walked into the front room and they’re dissecting a frog on Countryfile and I cried thanks.”