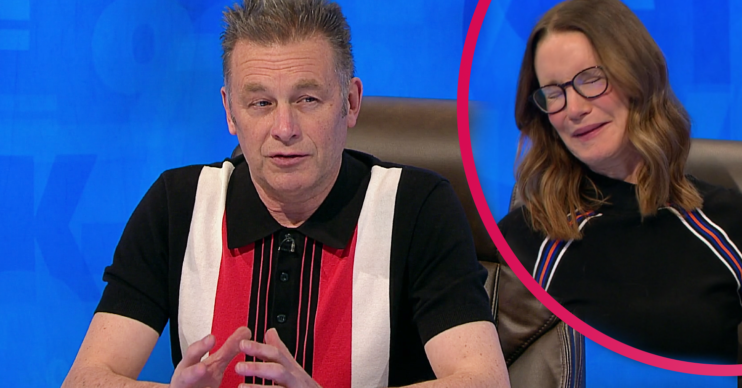 Not what you expect to see on Countdown!

In today’s episode (Tuesday April 27), 59-year-old Chris brought out a container full of bear poo to the astonishment of everyone.

And one whiff of the faeces made Susie screw up her face and exclaim: “That’s strong!”

What happened on Countdown today?

Chris appeared in Dictionary Corner with lexicologist Susie, with Nick Hewer once again in the presenting chair and Rachel Riley at the board.

As contestants Dave and Thomas battled it out, the conversation soon turned to excrement.

Chris was keen to teach the panel all about animal and human beings’ digestive systems and poo.

After speaking about animal faeces, he then moved on to humans.

“Humans, one thing we find repugnant is a group of chemicals called thiols which are very typically produced in food,” he said as the rest of the panel looked on nervously.

“And if we’ve been eating very sulphurous foods for instance, then they can make our faeces smell pretty rank.”

But he wasn’t finished with his bizarre doo-doo demo.

It was then as he brought out a white container from beneath his desk things started to get really weird. And smelly.

“You actually want me to smell this?”

Opening the top of a Petri dish he showed the panel and the audience some dried otter poo.

He continued: “But these are dried. I thought I’d bring along some fresh stuff.”

Chris then brought out a white container and opened the top.

After Chris took a smell, he then passed the open container to a nervous-looking Susie.

I thought I’d bring along some fresh stuff.

“Susie can catch a little whiff of this,” he said.

“You actually want me to smell this?” she asked.

With one whiff, Susie screwed up her face and asked Chris where it came from – a bear!

One viewer on Twitter couldn’t believe what she saw.

She wrote: “Have they really just had a full on lecture about poo on #countdown.”

She followed the comment with a facepalm and cry-laugh emoji.