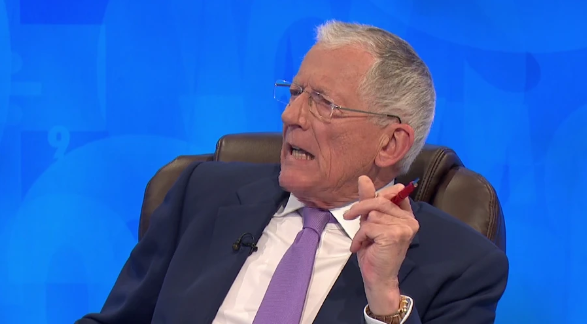 Countdown host Nick Hewer managed to keep a straight face when one of yesterday’s contestants (1.10.19) managed to form a saucy word.

Paul had the letters R, S, E, I, G, J, O, E, S to work with and confidently proclaimed he had managed to find a six-letter word.

Nick managed to keep a straight face as he went straight over to Susie and Dictionary Corner guest, poet Pam Ayres, who did manage to crack a smile.

Meanwhile Pam, chuckling, said that she had managed to find another six-letter word (rejigs) but “nothing more exciting, I’m afraid” making a reference to Paul’s saucy find.

Earlier this month, pregnant Rachel, 33, revealed that she was so stressed by social media trolls that her unborn baby stopped moving.

However, she revealed that vicious trolling from people who are upset with her criticism of the Labour party, including her backing of a BBC Panorama documentary which questioned whether Labour is anti-Semetic, left her so upset that her baby stopped wriggling around.

Jewish Rachel, 33, told former EastEnders actress Tracy-Ann Oberman, 53, on her podcast Trolled: “I found out I was pregnant in April and that was around the time of the Boycott Rachel Riley campaign.

“The week of the Panorama documentary it got really [expletive] ugly. It was disgusting.”