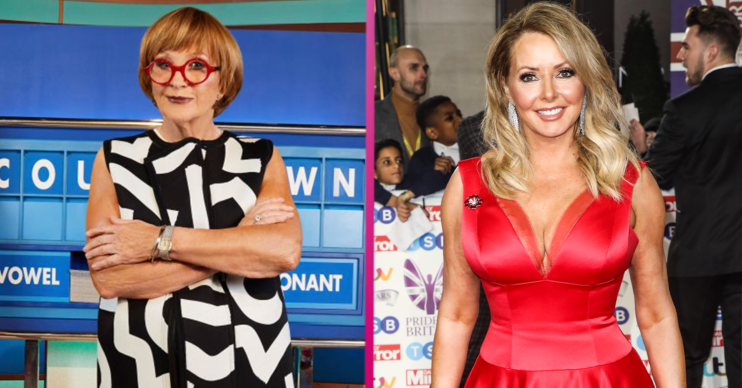 She's known for her frosty put-downs

Countdown presenter Anne Robinson appeared on Carol Vorderman‘s radio show earlier this week and it appeared she couldn’t help but make a cheeky quip at the star.

Carol and her BBC Radio Wales co-host Nathan Sussex spoke to Anne over the phone to discuss her taking over the reins of the Channel 4 show.

However, during the chat, Anne – known for her frosty put-downs – took aim at Carol.

Of course, Carol was Countdown‘s resident mathematical genius for 26 years.

So what did Countdown host Anne say about Carol?

Anne scolded Carol for failing to let her co-host Nathan get a word in.

Towards the end of the interview – which had been lovely up until that point – Anne asked: “Who’s your co-host?”

Read more: How did Susie Dent land her job on Countdown?

He added: “I’ve got a cutting-edge question…”

Anne replied: “You must ask it… she’s not given you a chance to say anything.”

Earlier on in the show Anne had admitted that Countdown is harder to film that it looks.

She said: “It’s a show that looks very easy. I think the first few shows I’m quite stiff.”

Countdown star Rachel Riley has also been in the news this week for her comments about Carol.

She said she wants to surpass Carol’s 26 years on the show.

Rachel told the Daily Mail: “As long as they’ll have me! I’m halfway there already. She did 26 years when I took over.

“I love it and I’m really lucky that it brings me other opportunities, and it’s not every day so I’ve been able to have loads of family time.”

Thank you everyone for the show today @bbcradiowales….you made us crack up laughing with your tales x ❤️ 🏴󠁧󠁢󠁷󠁬󠁳󠁿👍🏼😂 pic.twitter.com/mfo0VKb5ON

Carol, meanwhile, took to Twitter to show off her sensational curves.

And, although she’s on the radio, much like Amanda Holden she never misses an opportunity to dress up!

She was seen posing at the station wearing a skin-tight black jumpsuit.

Now what would they say about that outfit on Dictionary Corner?!