She's certainly rustled a few feathers in the past!

Countdown host Anne Robinson has become famous for her frosty manner and cutting jibes over the years.

But after hitting the headlines over her reported feud with co-star Rachel Riley, the 77-year-old has also come under fire for her past remarks about Clare Balding.

Here we take a look at how Anne “fat-shamed” the sports presenter, and what’s allegedly happening backstage at Countdown.

During her time as host of the Weakest Link, Anne poked fun at Clare’s weight and referred to her as “chunky”.

Clare has since spoken out about the incident on the podcast, The Mid.Point, with Gabby Logan.

She said: “Through the course of it, Anne had been very cutting and had talked a bit about when I was an amateur jockey, and why did I give up? I said, ‘Look at me, I got too heavy, right.’

“So then she would constantly use the line of, ‘Who ate too many cookies?'”

In the post-game interview at the end of the episode, Clare recalled saying: “Well, Anne used my weight as a stick to beat me with, but if that makes the crusty old cow happy, that’s fine!”

However, she added that she has “always had a real soft spot for Anne”.

According to reports, Anne is currently feuding with fellow Countdown star Rachel.

In fact, Rachel has even “considered quitting” the Channel 4 series over Nick Hewer’s replacement.

Earlier this week, it was claimed Anne – who joined as host in June – turned Rachel’s microphone off after becoming “irritated” with her chatting.

Rachel and Anne had clashed for some time

A source then told The Sun: “Rachel and Anne had clashed for some time and for Rachel, enough is enough.

“She has moaned about Anne a number of times and even said she would consider walking away from Countdown if the issues weren’t sorted.”

Before the reports came to light, Rachel explained that the team hadn’t had a chance to bond.

ED! has contacted Anne, Rachel and Channel 4 representatives for comment.

Earlier this year, Vanessa Feltz accused Anne of making “racist” remarks when she appeared on The Weakest Link in 2006.

In a scene cut from the episode, Anne reportedly asked the This Morning star: “Vanessa Feltz, looking the way you do, how do you think you land all these big black boyfriends?”

Speaking about the incident in February, Vanessa told The Mirror: “I said, ‘I don’t think you will use that in the show as it’s racist and also completely inaccurate and in every way unsuitable.

And her claims didn’t go unnoticed by Anne.

Hitting back at her comments, she also told The Mirror: “It took her 15 years to discover she was upset about it.

“I’d just been announced as the host of Countdown, and she thought, this will make a few headlines. And it did.”

Meanwhile, Anne also got on the wrong side of Eamonn Holmes after she commented on his parenting skills.

According to the Irish host, she accused him of “sacrificing fatherhood for fame”.

Speaking on RTÉ One’s The Meaning of Life, Eamonn revealed that he was “furious” over the star’s claim.

He said: “This is coming from a man who would fly back from London for his kids’ school sports days, who would take the last flight out of Belfast at 10 o’clock at night when he’d tucked them up in bed at 8pm.

If you were a bloke, I would knock your [bleeping] head off

“And this is the man who went into an airport lounge one Sunday morning, very, very early in Belfast, and there was one other person in that lounge and it was Anne Robinson.”

Eamonn continued: “I walked over to her and I simply said, very coldly and heartfelt meant, ‘If you were a bloke, I would knock your [bleeping] head off. I just want you to know that’.”

The pair later buried the hatchet after Anne apologised. 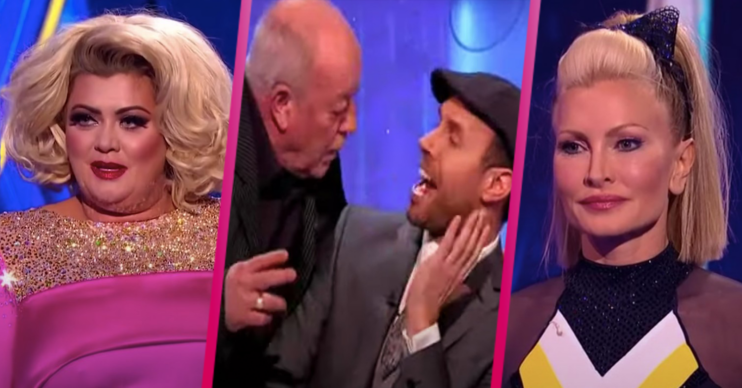