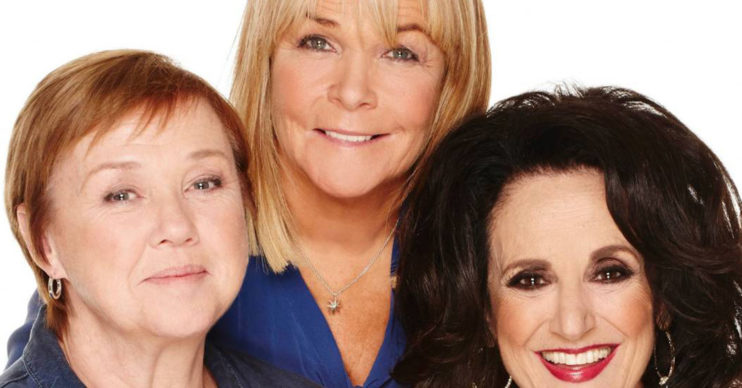 Birds of a Feather stars in ‘talks’ over a lockdown special

And we're also getting some classic re-runs

Two of the stars of classic sitcom Birds of a Feather have revealed that the show could be revisited for a special lockdown edition.

Linda Robson and Lesley Joseph – who played Tracey and Dorien respectively – told the Distinct Nostalgia podcast that there has been ‘talk’ of the show making a comeback with the two actresses reprising their original roles.

Neither Linda, 62, nor Lesley, 74, commented on whether their former co-star Pauline Quirke, 60 – who played Tracey’s sister Sharon – would be involved in such a project.

First screened by the BBC in October 1989, Birds of a Feather went on to become one of the most popular sitcoms of the 1990s. It eventually came to an end in December 1998.

The show returned to our screens in January 2014 – this time on ITV – and continued until December 2017.

There’s a very good, funny episode – or even a whole series – to do on that, because the characters would work so well with it.

Explaining why it was axed, ITV boss Kevin Lygo said at the time: “We had success with Birds of a Feather – our most successful sitcom in years – but it’s come to a sort of natural end.”

However, Linda and Lesley seemed optimistic that it could make another return, this time themed around the coronavirus pandemic.

Linda told the podcast: “There was talk of [making] one of me and Lesley on lockdown. So Tracey and Dorien in lockdown. But we’re still waiting to hear about that one – and we’ve got a while to go in lockdown, haven’t we!

“You could almost do it on Zoom – it would be absolutely brilliant.”

Lesley then added: “There’s a very good, funny episode – or even a whole series – to do on that, because the characters would work so well with it. It could happen, so let’s see. We’d like to do that one.”

One thing that’s definitely happening is that the original episodes are being screened on ITV on Friday evenings.

Commented Linda: “It’s really nice for people who haven’t seen it before. And people that are used to it can have another look and it will cheer them all up a bit.”

This isn’t the first time that new Birds of a Feather material has been hinted at.

Last year, Lesley appeared on This Morning, and was asked by presenter Rylan Clark-Neal whether we could see the girls on screen again.

She replied: “I don’t know, to be honest. I’m not really free this year – I’m doing Calendar Girls and then panto, as I always do.

“I never say never – this year just didn’t fit in, so hopefully next year. Who knows?”

The next classic episode of Birds of a Feather is on ITV on Friday at 8pm.