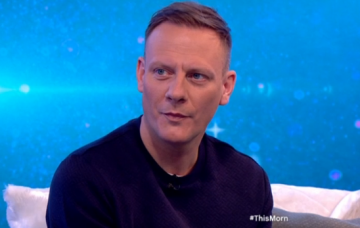 Well this got a bit awkward.

Following his elimination from Sunday’s episode of Dancing On Ice, actor Antony Cotton has been forced to defend himself on Twitter, after Strictly dancer James Jordan said some rather unflattering things about them.

The war of words began during the live show, when Antony was sent home by all four judges.

“Also, is it just me but he does seem like he could be a right pain to work with. Doesn’t come across likeable at all.”

Shane also alleged he’d heard Anthony “refused to give people an autograph at a charity do I was at.”

James tweeted back: “I knew it…. I’m always right. Hope you are well mate, say hi to your mum from me.”

Continuing in the same anti-Antony vein, James then retweeted a fan who wrote: “Agreed!! It makes me so uncomfortable to hear him talking back, the judges are there for a reason!”

He also tweeted: “Taxi for Antony!!!”

But not everyone agreed with James.

Many followers were soon rushing to defend the Corrie actor, who plays Sean Tully in the ITV soap.

While another added: “Leave Antony alone! You don’t know him, you’re assuming. Check his charity work and work with the forces.”

The actor himself soon got involved, tweeting: “Currently doing two jobs at the moment, so please don’t worry about my career.”

The 42-year-old tagged in his skating partner Brandee Malto, adding: “As for wondering what I’m like to work with, maybe take the guess work out and ask @YayItsBrandee?

“I don’t think you’ll find the answer you’re looking for. Trolls rarely do.”

He later deleted the tweet, but replied to Shane’s message, writing: “That isn’t true. I have never refused anyone an autograph, let alone at a charity event.”

He also replied to a fan who told him to “ignore ’em”, saying: “Indeed. Some people are just horrible though, aren’t they?!”

Read more: DOI’s Jason Gardiner confirms he hasn’t been asked back for next year’s show

The Corrie actor is not having the best week when it comes to criticism.

After Antony – who broke his ribs during training earlier this month – performed his routine on the ice, judge Jason Gardiner told him: “Well brace, brace, brace yourself, Antony, I don’t know what happened. I really expected that you would take to this competition and do more for it.

“I really feel like you’ve given up. What did you do?”

He wrote: “Spare ribs to go? @antonycotton at least now u can recover fully. Such a shame your main skate routine wasn’t on par with your save me skate.”

Poor Antony. get home and rest up those ribs, eh?

Dancing on Ice airs Sundays at 6pm on ITV.

Whose side are YOU on? Leave us a comment on our Facebook page @EntertainmentDailyFix and let us know what you think!