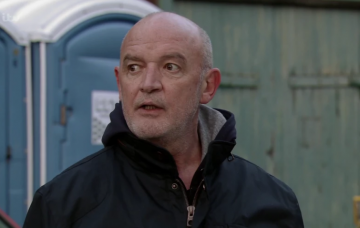 Corrie viewers reckon they know how Pat Phelan will finally get his comeuppance – with Andy and Vinny’s bodies being exposed!

The builder was left horrified in tonight’s episode, as the project manager of the Mill development dropped the bombshell that they would be putting 10 new flats on the site.

And when Phelan asked how they would fit them in, Mona replied that they would need to drain the reservoir and build them on there!

Of course, Corrie viewers know that wicked Phelan has dumped the dead bodies of Andy and Vinny in the water, hoping they would never be found.

But with Mona ordering him to drain the water asap, how is he going to talk his way out of this one?

Nicola and Gary are already suspicious about what Phelan could be hiding, and they’re determined to find evidence that will send him down for a long time.

Gary clocked Pat’s discomfort at having Mona sniffing around, and Nicola deduced that her dad was worried Mona would find out he’d been fiddling the books.

Imagine her horror if she knew what he was really hiding!

Could it be vinny & Andy’s body’s, is phelan going to be caught once and for all #corrie

Ooh Phelan’s boss wants to drain the water 🤫 this could get interesting… maybe the walls are starting to close in.. Got a bad Phelan about this 🤫 #corrie @itvcorrie

#corrie I think its time for Pat #phelan to bump project manager mona off before it is too late! 🔫@connor9mcintyre

#Corrie get out of that one Mr Phelan.

Please #corrie let this b the start of the downfall of Phelan.

#corrie does this mean Phelan is about to be found out. please let it be so

It was clear that Pat was ‘Phelan’ the pressure, as he tried to talk Mona out of draining the water.

He even hinted that there might be rare wildlife – perhaps newts or toads – living in the reservoir, and that they’d need to hold off taking any action until they knew for sure what they were dealing with.

Many feel that Phelan’s killing spree has gone on for too long, and they’re willing him to be found out before any more blood is shed on the cobbles.

And it looks as though they will finally get their wish, as once that water is drained and the bodies come to light, it’s only a matter on time before the cops come knocking for Phelan!

So could this REALLY be the beginning of the end for the cobbles killer? Leave us a comment on our Facebook page @EntertainmentDailyFix and let us know what you think!