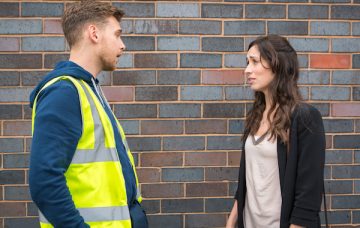 What will she do when she realises exactly how dangerous he is?

Josh is rattled when his old training partner Claire tells him that Shona had been in the gym asking questions about his past.

Meanwhile Shona’s detective work isn’t over as she dupes Dec into meeting up with her.

After pushing him for answers, she is horrified when she discovers that Josh raped him too.

But before she can get any more out of him, Dec runs off, leaving Shona stunned.

Later she urges David to go to the police, leaving him equally shocked when she reveals he’s raped before.

Will this new information change David’s mind about reporting Josh who is clearly a dangerous sexual predator.

Shona also feels compelled to tell Alya Nazir, Josh’s current girlfriend, that he isn’t the man she thinks he is.

An angry Josh continues to wind David up, this time by dripping poison into little Max’s ear.

He tells the schoolboy that David doesn’t love him as much as he loves Lily because he’s not really his son.

When Max then tells David what Josh said, he’s livid.

He furiously storms over to the cafe and grabs Josh, warning him to stay away from his son.

What will David’s next move be?

Will he go to the police and will he and Josh be able to convince Dec to speak out as well?

Should David go to the police? Let us know by commenting on our Facebook page @EntertainmentDailyFix!