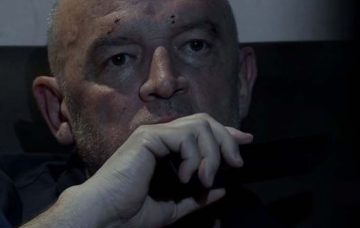 Corrie SPOILER: Eileen gets a call from Phelan!

Poor Eileen Grimshaw is left terrified in Coronation Street next week when she answers her mobile and is greeted with the voice of her supposed-to-be-dead husband, Pat Phelan.

As far as Eileen and the Corrie residents were concerned murdering Phelan had met a watery death after falling/being kicked into the freezing ocean.

But as viewers know, he survived the fall and has been holed up at a B&B waiting for the time to make his comeback and get revenge on those he feels betrayed him.

Already being terrorised by a stalker, Eileen is shocked when she gets home and finds two blokes clearing out her house.

She’s even more shocked when they tell her the job was ordered by a man called Pat who’d given them a key!

Later, she’s horrified when she finds herself locked in the cab office and her mobile rings.

When she answers it, Eileen is left reeling to hear Phelan’s voice on the other end!

Steve McDonald finds her locked in the office and they call the police who tell Eileen that her stalker could have lifted Phelan’s voice from a voicemail.

Eileen is appalled to think that someone could hate her that much and initially accuses Alya Nazir of being the one behind the call.

After a brick is put through Eileen’s window, Faye Windass suggests that maybe Phelan isn’t actually dead but the police say they have no reason to think he could be alive.

What do they know?

Then Eileen gets another weird call – and this time her stalker is lurking outside in the ginnel!

Are you looking forward to Phelan’s return? Let us know by commenting on our Facebook page @EntertainmentDailyFix!