Is the cat out the bag for Kana?

Fans of Coronation Street are convinced they’ve worked out how Zeedan Nazir discovers his wife Rana is having an affair with her best friend, Kate Connor.

Eagle-eyed viewers have put their detective caps on and believe Zee catches the lovers out at Luke’s funeral.

The winter trailer – which was released earlier this week – shows a furious Zeedan smash a picture of him and his wife in a fit of temper.

Fans spotted that in this scene, Zeedan is dressed in a black suit and tie – not his usual attire as a chef.

They also noticed a scene in the trailer where Rana and Kate are kissing.

Kate left the cobbles this week and headed down to Devon following news of Luke’s death and sharing a drunken kiss with her pal Sophie Webster.

But it doesn’t look like Kate will be down south for too long as pictures of Luke’s funeral have been released and she is among the mourners.

Kana fans flocked to Twitter, predicting it’s only a matter of time before their favourite ship is out in the open.

“I think its when its luke funeral when zeedan kick off in the nazir house and chucks his weddin photo over we think he find out about kana affair,” said one viewer.

Another added: “If Zeedan sees them kissing on the day of the funeral and then goes home and smashes up the place..means they literally kiss as soon as Kate’s back for the funeral.”

A third said: “Hmmm so my theory is.. Zee their dan either hears #Kana talking about their relationship after the funeral or sees something like maybe a kiss which then blows the whole affair wide open and that’s how he finds out about it!! Coz he’s in funeral clothes when he smashes their photo..hmmmm.” 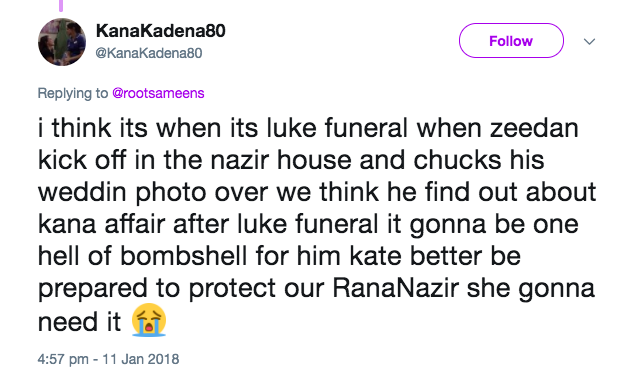 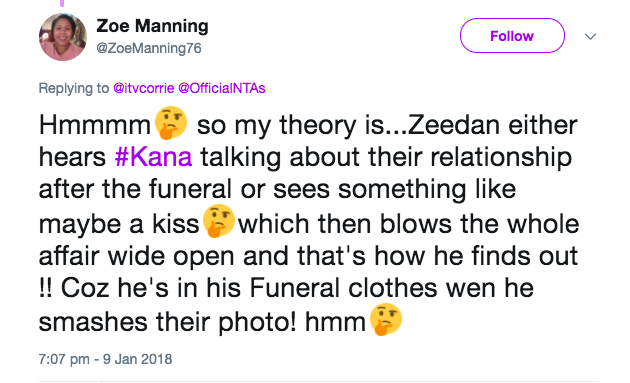 They could have a point, this is Soap Land after all and we know that weddings, funerals and births can never pass smoothly.

Rana and Kate have been having a passionate affair since Rana declared her love for Kate last year.

They’ve managed to keep it pretty quiet but Luke knew, leaving fans worried this might give Rana a motive – in the eyes of the police – to murder him.

There’s an incriminating voicemail on Luke’s phone, left by  frantic Rana before he was killed, pleading with him not to tell her husband.

And we all know what incriminating voicemails do in soap.