Ok, so this is weird.

Viewers watched in horror as the mechanic was brutally shot and then trapped in his car as it exploded, after evil Pat Phelan fired his gun at the petrol tank.

Read more: Is there a new killer on the Corrie cobbles?

In the aftermath, Maria was in The Rovers when another former lover, Aidan Connor, came over to her for a chat.

She told him: “You’d better watch yourself, all my exes seem to come to harm.”

She’s not wrong either, Luke is the fourth of Maria’s exes to end up dead.

Charlie Stubbs was the first to meet his maker after having an affair with Maria behind Tracy Barlow’s back.

Tracy bludgeoned him to death with a statue.

Next up was lovely Liam Connor who was mowed down by a jealous Tony Gordon when he discovered Liam had been sleeping with his fiancee, Carla Connor.

Maria then hooked up with Tony, unaware that he killed Liam, and Tony delivered baby Liam, which has a kind of poetic justice to it.

But then Tony was killed in a horrific accident when Underworld blew up. Yikes.

Fans took to Twitter to point out the pattern, even labelling Maria ‘The Black Widow.”

Another simply pointed out: “All Maria’s boyfriend’s are dead #corrie.”

While a third pointed out a statistical likelihood: “Maria: “You’d better watch yourself, all my exes seem to come to harm” Tbf statistically Maria, anyone coming to harm on that street will probably be your ex…” 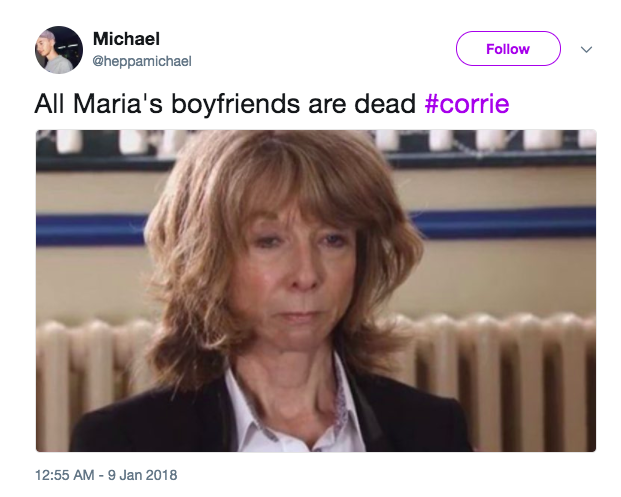 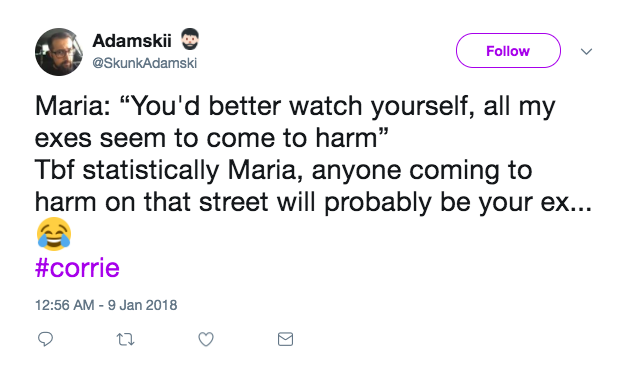 Maria – played by Samia Longchambon – is currently single after her disastrous affair with Aidan last year and a brief fling with psycho Will Chatterton.

Both men escaped with their lives, but with Aidan due to leave the cobbles later this year, perhaps the Curse of Maria could yet strike him too….

Coronation Street continues Friday and 7.30pm and 8.30pm on ITV