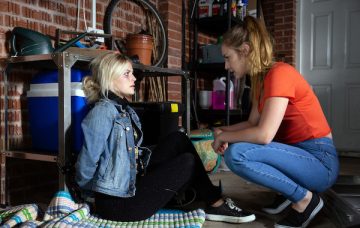 Coronation Street fans raging as Kayla ‘gets away with’ kidnapping Bethany

But will she be back?

Kayla Clifton’s plan for revenge against Bethany Platt came to a conclusion this week – and some fans were left feeling a bit miffed.

In dramatic scenes aired on Wednesday night (25 July), Kayla was revealed as Neil’s daughter… Pushing her to kidnap and assault her enemy – the girl she believed set her dad up and left to rot in jail.

However, Craig came to the rescue amid the tense hostage situation in Kayla’s garage and forced Kayla to hear a tape recording of Neil confessing.

The young waitress was devastated to realise that her father was, in fact, guilty of grooming and rape after all.

She dropped her weapon and fell apart as the truth about her dad’s disgusting crimes sank in.

While some fans actually felt a little bit sorry for brainwashed Kayla, many more were angry that she “got away with it” when she was allowed to walk free.

They slammed the double episode for its “weak ending” after Bethany and Craig decided NOT to report her to police.

Worried mum Sarah had called the cops but, when they arrived at Kayla’s garage, the pair declared the incident a “misunderstanding” and gave each other a knowing look.

Kayla was left in a teary mess in the garage.

One fan commented: “Bit of a weak ending. Is that the last of the horrible Kayla? Friggin hope so!”

#Corrie shame they're letting kayla get away with it! Throw her behind bars!

Kayla off the hook – what a lame ending! Bethany, knocked unconscious with a vase, slapped senseless and not a mark on her!#corrie

Hopefully that’s the end of that. Blah ending to a bad storyline re Kayla/Bethany #corrie

Absolute nonsense of an ending.!!!! #coronationstreet

After all that build-up that Kayla storyline didn’t really amount to much, did it? #Corrie

Another added: “Kayla off the hook – what a lame ending! Bethany, knocked unconscious with a vase, slapped senseless and not a mark on her!”

A third blasted: “Hopefully that’s the end of that. Blah ending to a bad storyline re Kayla/Bethany.”

“So disapointed & angry that Kayla walks away scott free after making Craig ill & terrorising Bethany this completely sends out the wrong message. This is not right,” fumed another.

In fact, hundreds of soap fans raged that troubled Kayla was not going to get her comeuppance, after months of stalking her victim, messing with Craig’s head and triggering his OCD.

But is this the last we’ll see of Kayla?

Or will we see her confront her twisted dad in jail?

Would you like to see Kayla become a regular character? Leave us a comment on our Facebook page @EntertainmentDailyFix and let us know what you think!