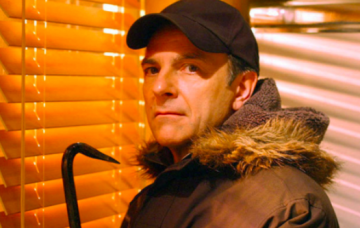 Forget Pat Phelan, a much more menacing serial killer is returning to the cobbles.

Richard Hillman is returning to Coronation Street this week with a curse.

The very much dead serial killer is going to deliver a message to his wife Gail Platt via the medium of psychic Rosemary.

But, much like in life, Richard’s message won’t be a nice one.

Instead he will reveal how he cursed Gail and her family after failing to kill them in his final deranged act on earth when he kidnapped them all and tried to drown them in the canal.

And let’s face it, the Platts have been through quite a lot since Richard shuffled off this mortal coil.

Of the husbands Gail has had who haven’t tried to kill her, only one survived with the other two dying tragically.

One of her sons tried to kill the other, leaving him with a brain condition and her daughter-in-law killed her ex and buried him in a drain beneath Gail’s granny flat.

Said daughter-in-law, Kylie, was then murdered, and Gail’s daughter Sarah had a nervous breakdown and required hospitalisation.

Then Gail’s granddaughter was groomed, abused, gang-raped and put through utter hell, before deciding to become a stripper and eventually glassing a punter in the face.

And now her son has been drugged and sexually assaulted.

So it’s little wonder why Gail will appear eager to get rid of this curse once and for all.

She said: “Rosemary’s a quite a mysterious bird who’s clearly got information and she is – or purports to be – psychic.

“Who knows if she has genuine gifts? But it’s just delightful to be Rosemary. I’m fond of her already.”

Do you think Rosemary’s genuine? Let us know by commenting on our Facebook page @EntertainmentDailyFix!