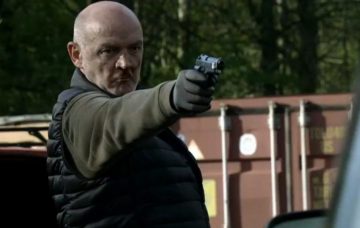 Familiar face will turn evil and cause mayhem for years

A new Corrie super-villain will soon be spreading terror on the cobbles — and viewers are already hugely familiar with them.

The character will be “corrupted”, turn evil and transform into a “complicated villainous presence” as Weatherfield is rocked to its core when the Underworld knicker factory collapses, killing one much-loved resident.

And the disaster, which at first seems to be an accident, is the work of Coronation Street’s new arch-baddie, who is already well established on the soap in a completely different role.

Bosses are remaining tight-lipped about the identity of the new villain and the victim, but they have revealed it links back to cold-blooded killer Pat Phelan.

The explosive scenes are set to be aired in March and the fallout will continue for years, soap chiefs say.

Coronation Street’s new showrunner Iain McLeod said: “Corrie can have baddies who come in, burn bright and then are gone, but also a more long-range type, like Mike Baldwin, who is ruthless and self-serving and rides roughshod over everybody,” the Daily Mirror reports.

“We’re designing a character who is more of that latter type, who can stay in the show for ever as an antagonist just messing up everyone’s lives. We’re going with this character on this journey.

Although the new super-villain will be very different from Phelan, whose murderous reign of terror was finally stopped by Anna Windass, the plot will explode onto screens with a blast from the dead builder’s past.

Iain said the soap’s writers had linked Underworld’s impending collapse to an old story involving the killer when he worked on the factory roof.

The tragic aftermath will see locals quickly blaming Carla Connor, which causes her to spiral into mental health problems, and she becomes delusional and paranoid.

Iain promised there would be a standalone episode focusing on the factory boss which will reveal who is behind the disaster.

The scenes are set to air on Coronation Street on ITV in March next year.

Who do you think Corrie’s new supervillain will be? Leave us a comment on our Facebook page @EntertainmentDailyFix and let us know what you think!