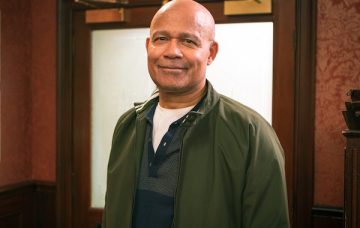 The actor, 54, arrived in Coronation Street as Mike Thornberry, a love interest for Liz McDonald.

However Louis has now confirmed that he won’t be staying on the cobbles for long.

While Corrie fans seemed to take a shine to the character of Mike, an old teacher of Liz’s son Steve, it seems he was never meant to stick around.

Addressing one of his 18,200 Twitter fans, Louis expressed his clear disappointment at only having a short stint on the ITV soap.

Alongside a sad emoji face, he said: “I was only on a 3month contract!”

Naturally, many of his followers expressed disappointment at the news, with a few getting angry at recently departed Corrie boss Kate Oates for the decision.

In fact, Louis retweeted one fan who blasted: “Not being funny but no wonder corry is getting a new boss when they get rid of good characters like @thelouisemerick.

“Why bring a quality actor in and not provide them with a real story line. This type of actor and the character is what is missing with coronation street.”

He later responded to the same tweet, saying: “Ah bless you! To be fair to @itvcorrie they’re not “getting rid of me” the part at the outset was for 3months! But,who knows what the future holds.”

Ah bless you!To be fair to @itvcorrie they're not"getting rid of me" the part at the outset was for 3months!But,who knows what the future holds😉xx https://t.co/eneNn8qJiw

So could he be back? We hope so!

Louis is due to star in the stage adaption of The Full Monty later this year, alongside Hollyoaks star Gary Lucy.

But after that, his fans would love to see him back in Liz’s arms.

Have you enjoyed having Louis’ character Mike around? Leave us a comment on our Facebook page @EntertainmentDailyFix and let us know what you think!