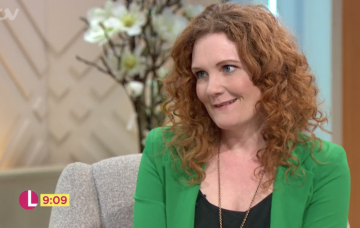 She spilled the beans on Lorraine this morning!

Jennie MacAlpine announced the lovely news at the weekend that she is expecting her second baby later this year – and today she appeared on Lorraine to talk about her pregnancy.

The mum-to-be already has a three-year-old son Albert with husband Chris Farr. And the couple are thrilled to be welcoming another addition to their family.

Not only did Jennie reveal to Lorraine this morning that she is actually due in October, but she also admitted that she has already been thinking about what the new baby’s name might be.

“We Asked Albert if he would like a little brother or sister, which is probably a bad question, but luckily he said yes. The he said ‘but what am I going to call it?’ so he thinks that he’s got the job of naming.

Lorraine hinted that perhaps the new baby would have a traditional name like their older brother, which Jennie agreed with…

Jennie has been inundated with well wishes and congratulations from fans on social media – but she also said that most people at Corrie have also only just found out her news.

“I kind of sprang it on them, so now they’re frantically thinking about what to do now.”

She even had some ideas of her own about how the writers could work round her blossoming bump: “I’ll have to carry trays, or baskets of laundry – unless Fiz gets pregnant, who knows?

“After a while the directors think ‘we don’t know what to do with this [bump] now!’ I have no idea how I will be written out but maybe Cilla could rear her not-so-ugly head again like when I went into the jungle? Who knows!”

What Coronation Street character do you think Jennie should name her baby after? Leave us a comment on our Facebook page @EntertainmentDailyFix and let us know what you think!