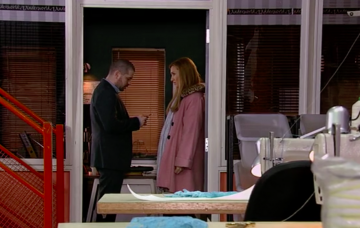 Seriously, how is everyone missing this?!

Coronation Street viewers have been baffled for weeks as to how NO ONE on the cobbles has noticed Eva’s blooming baby bump.

But last night, fans were all over social media expressing their bewilderment as Aidan found out his ex-fiancee is up the duff.

And he said she didn’t look pregnant!

Since she thought something had gone wrong with her pregnancy a couple of weeks ago, Eva’s been wobbling about her plan to give her baby to Toyah.

She almost phoned Aidan from the hospital, and has been looking longingly at him across the bar in the Rovers. And last night, Toyah selflessly told Eva to spill the beans.

She said if Eva thought there was a chance that she and Aidan could make a go of things, then she had to tell him.

She went to the factory and told her ex-fiance that she was pregnant with his baby.

“Seven months?” Aidan said in surprise. “You don’t look it.”

And that’s when the Corrie fans took to Twitter to express their amazement. 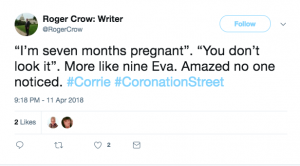 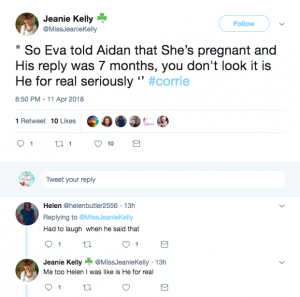 “Eva should just open her coat and flash Aidan the bump,” suggested another viewer – shortly before Eva did just that!

And other fans pointed out that no one has noticed Eva’s very obvious bump. 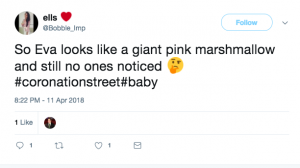 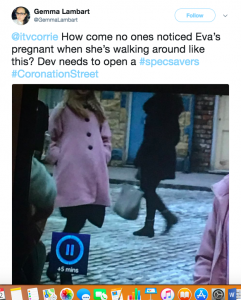 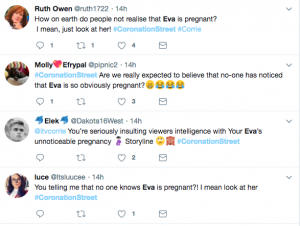 “You telling me that no one knows Eva is pregnant?!” said another fan. “I mean look at her.”

After Aidan rejected Eva and said he wanted a DNA test, the heartbroken mum-to-be went back to the pub and told Toyah their plan was still on.

How long do you think Eva can hide her pregnancy? Let us know by commenting on our Facebook page @EntertainmentDailyFix!