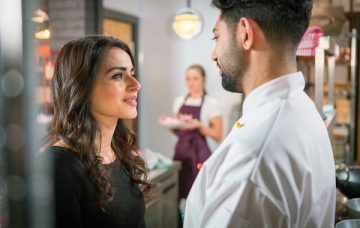 With the news about Rana and Kate totally out in the open, it’s looking bleak for Zeedan when Rana’s dad stops his investment into Speed Daal.

The money for Zee’s new business was only on condition that he and Rana continued with their sham marriage – and now that’s over, there’s no more cash.

With Zee struggling to pay for the furniture he needs, Rana is feeling guilty and is desperate to help him out.

She goes to big brother Imran to see if he’s got any bright ideas about how to raise the money, and she’s thrilled when he offers to invest in the business instead.

But Kate isn’t happy about how much time Rana is devoting to her ex, and she’s even less impressed when Rana says she can’t move in with her.

As Rana and Zee clean the restaurant ahead of its opening the next day, they share a hug – spotted by jealous Kate.

And when she sees a text from Zee on Rana’s phone she’s even more annoyed, and has a go at her girlfriend – dismissing her plan to contact her family.

When Rana, Zee and new waitress Kayla work setting up the restaurant, Rana’s jumpy because she’s not heard from her parents. Zeedan says she should set the police on them.

So when Rana’s dad arrives with the news her mum has been arrested, she immediately assumes Zee is behind it.

There’s an angry confrontation between the pair, but later they kiss and make-up – literally.

And a thrilled Zeedan tells Kayla he thinks Rana still loves him.

Who do you think Rana should be with? Let us know by commenting on our Facebook page @EntertainmentDailyFix!