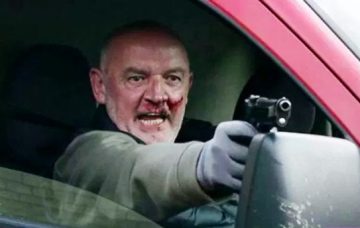 Her perfect day looks set to end in tragedy

Pat Phelan will return to Coronation Street and shoot Michelle Connor on her wedding day to Robert Preston, reports The Sun.

Apparently the scenes will be so gory they can’t be shown in the ITV soap’s usual pre-watershed slots so have been penned in for the late night slots during Britain’s Got Talent final week.

Read more: Corrie’s Shayne Ward had to be carried out of his own farewell party

Michelle – played by Kym Marsh – will be the evil builder’s fifth victim as she gets caught in the crossfire as Phelan returns to get revenge on those he feel have wronged him – like wife Eileen.

A source told the tabloid: “The scenes were shot last week and are more like a horror film than a soap.Coronation Street SPOILER: Phelan to shoot Michelle Connor in wedding day bloodbath

“Phelan will come back to Weatherfield and crash Michelle and Robert’s wedding day. In all the carnage, she will end up being shot with ­Robert trying desperately to save her life before she bleeds out.

“Inevitably, the other guests will be involved in the madness too in the ­aftermath of him ­shooting her.

“The scenes are so gruesome ITV bosses have decided to play them after 9pm so they don’t fall foul of any rules.”

At the moment no one on the cobbles knows that Pat is alive after surviving his death drop into the Irish sea earlier this year.

He’s been holed up in an B&B plotting his revenge plan, but last week viewers saw him check out after watching Eileen and his daughter Nicola on the news appealing for Anna Windass’s release.

He watched in scorn calling them “all bezzie mates now.”

The report didn’t say if Michelle would survive the shooting.

Are you looking forward to Phelan’s final stand? Visit our Facebook page @EntertainmentDailyFix and let us know!

Coronation Street airs Monday, Wednesdays and Fridays at 7.30pm and 8.30pm on ITV