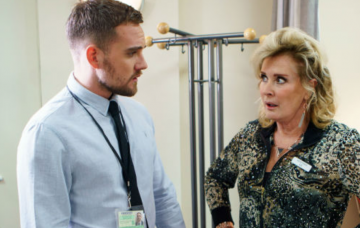 What has he been hiding all this time?

Liz McDonald is left stunned next week when she discovers Ali Neeson hasn’t been entirely honest about his return to Weatherfield.

As the shocking news about Aidan’s death leaves Coronation Street residents in mourning, Michelle Connor decides it wouldn’t be right to hold her wedding so soon after such a heart-breaking tragedy and calls her nuptials to Robert off.

But she is surprised when her son Ali is uncharacteristically supportive and suggests that maybe she scale back the celebrations and have a quiet, intimate, family-only affair instead.

Michelle is stunned when Ali then goes one step further and offers to help her organise the day as well.

But has Ali realised that he wants to build bridges with his mum after all, or is he up to something?

Liz is shocked when she finds out that Ali has been hiding a sinister lie since he came back to the cobbles – leaving her to wonder if Michelle is in danger.

When working at the medical centre, Liz struggles to hide her surprise when Dr Gaddas accidentally lets slip that Ali had to pull some strings to get his placement in Weatherfield rather than a different location.

Ever since Ali came back to the cobbles back in February, he has maintained that him being placed at the medical centre round the corner from where his biological mum lives was a total coincidence.

But with the truth now out, viewers will be left wondering why he has lied… and what he is hiding.

Liz confronts Ali and tells him that as he so clearly wants to make amends with him mum, then he’d better get on and do it.

But with something clearly to hide, will Ali will he take Liz’s advice?

Why do you think Ali is lying? Leave us a comment on our Facebook page @EntertainmentDailyFix and let us know what you think!