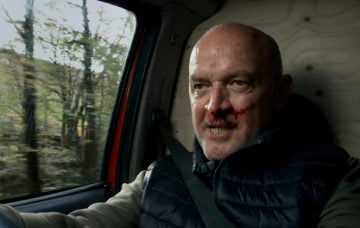 Coronation Street spoiler: Is Pat Phelan back in Weatherfield?

He's leaving a trail of clues...

It’s only a matter of time before Pat Phelan shows his horrible face in Weatherfield again.

And, with her estranged husband hell-bent on getting revenge, Eileen has EVERY reason to be fearfully looking over her shoulder.

In upcoming scenes to be shown next week, Pat appears to be leaving a few clues that he’s returned and not too far away…

Is it wrong that we can’t wait to see him again?

When Nicola locks herself out, she is worried when she can’t find her spare key. Later on, Seb finds it and says it must have been there all along – but was it? Or has it been stolen?

Could it be that killer Pat is back in Weatherfield after hiding out in a B&B?

Eileen – and soap fans – thought the psycho builder had died, after plummeting into the sea at Whitehaven in dramatic Good Friday scenes.

In a dramatic showdown, Eileen had found out her other half was responsible for the deaths of Andy Carver, Vinny Ashford, Luke Britton and her ex, Michael Rodwell.

But, by Easter Monday, Pat (Connor McIntyre) had ‘returned from the dead’ and was seen sewing up his own wounds from his fall in a seaside B&B.

In the following weeks, Eileen (Sue Cleaver) locked herself away as she tried to come to terms with her husband being a serial-killing-madman.

But then strange things started to happen – she found her back door left wide open and discovered that someone had put nails in her car tyres.

So it’s either a poltergeist or Pat Phelan. And we’d rather have a supernatural ghost in our house than a murdering toe rag any day!

Will Pat ever get his comeuppance or will be continue to claim more victims? The suspense is killing us!

Do you think Pat Phelan will try to kill Eileen? Leave us a comment on our Facebook page @EntertainmentDailyFix and let us know what you think!