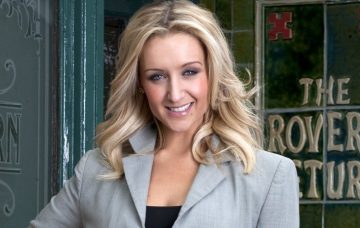 That looks like a look of love to us...

Here’s a first look of the most eagerly anticipated baby of the year, no not that one, Eva Price’s new daughter in Coronation Street.

The first official snap of Eva and little Suzie was posted to the Coronation Street Instagram account earlier today.

Read more: Is Nick Tilsley set for a Rovers return later this year in Coronation Street?

It shows the pair in hospital with Eva staring down in awe at her little girl. The little girl she’s meant to be handing over to Toyah Battersby…

Eva and Toyah have arranged a secret deal over the baby with Toyah intending to pass her off as the baby her surrogate tragically miscarried earlier this year.

Eva discovered she was pregnant with her ex-fiance Aidan Connor’s baby at 17 weeks and planned to have an abortion.

But when Toyah heard the news about her biological child being lost, she came up with the scheme to secretly pretend Eva’s baby was hers.

No one knows of their secret pact – even Toyah’s partner Peter Barlow.

Eva tried to tell Aidan in emotional scenes earlier this month but the factory boss didn’t believe her as she’d previously lied about being pregnant.

However Peter’s son Simon Barlow has got wind of the fact Toyah and Eva are hiding something from Peter.

Will he work out what or is it so far-fetched he would never figure it out?

It’s been confirmed that the storyline will lead to actress Catherine Tyldesley leaving her role as Eva in the coming weeks.

But will she be leaving with or without her new daughter?

The look on her face in that pic suggest she won’t be letting that baby go anywhere easily.

What do you think of Corrie’s baby swap story? Visit our Facebook page @EntertainmentDailyFix and let us know your experience.

Coronation Street airs Mondays, Wednesdays and Fridays at 7.30pm and 8.30pm on ITV