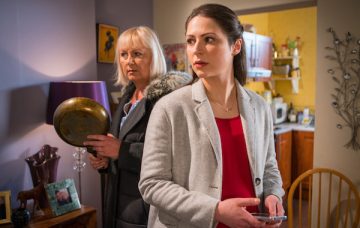 Coronation Street SPOILER: Eileen Phelan terrified as someone breaks into her house

Is evil Pat back to torment her?!

Since Pat Phelan’s crimes were exposed, his devastated wife Eileen has been hiding out at home in Coronation Street, trying to avoid everyone.

She’s feeling guilty, and still reeling from the events on the pier, when she sent Phelan plunging into the water below – and to his death, as far as she knows.

Of course, we all know that evil Pat didn’t die, but Eileen and her neighbours in Weatherfield are still in the dark about that.

Though could Pat be making an appearance on the cobbles sooner that we thought?!

Next week, Eileen is struggling and best mate Liz is worried. So with a bit of her old determination, Eileen manages to get herself sorted out, cleans the house, and even cooks dinner for herself and Summer. She’s not completely back to her old self, but it’s a start.

Later, Nicola comes to visit and tells Eileen she should back the campaign to free Anna Windass that Daniel’s organised.

Eileen, though, doesn’t want to get involved. She says she is too ashamed and she just wants to put everything that’s happened behind her for good.

She tells Nicola that she wants Gary to run the builders’ yard and employ Seb – desperate to make amends for Phelan’s nasty deeds.

But it looks like not everyone is forgiving. Summer finds some horrible comments online about Eileen, and though she tries to shield her from the worst of it, Gail wastes no time in telling Eileen what she’s seen.

And back at the house, Eileen is frightened when she finds her back door wide open – and later sees her car tyres have been punctured with nails.

When she and Nicola return to the house later, they’re both scared witless when they hear a noise on the stairs.

Armed with a pan, Eileen prepares to confront her intruder.

Is it someone who wants Eileen to pay for Phelan’s crimes – or could it be Pat himself ready to take the ultimate revenge on the wife who pushed him into the sea?

Who do you think Eileen’s intruder is? Let us know by commenting on our Facebook page @EntertainmentDailyFix!