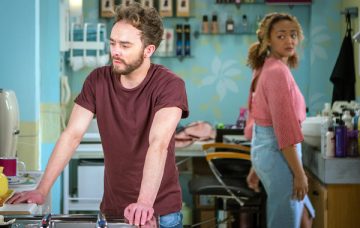 Someone needs to help him!

David Platt’s life has been on one huge downward spiral since his horrifying rape at the hands of former friend Josh Tucker.

He’s split with girlfriend Shona, pushed away his worried family, and is facing charges for battering Gary Windass in the boxing ring, too.

Next week, things take an odd turn when Gary decides he’s going to be the one to help David.

He’s convinced David is heading for a breakdown in some sort of delayed response to Kylie’s murder.

When Gary talks to David, tormented Mr Platt just goes along with him. And Gary’s none the wiser that it’s not Kylie that’s causing David’s grief.

Meanwhile, Shona tells Maria that she can trace David’s odd behaviour back to when he and Josh fell out. Maria tries to talk to her mate, but he distracts her.

And later, when Maria goes round to see David at home, she’s shocked to find him and new salon apprentice Emma in a state of undress!

It seems David’s already moving on from Shona, because he gives Emma a set of keys and asks her to move in.

Later, he introduces his new girlfriend to his family and Bethany’s shocked to realise Emma was in the year above her at school.

Shona’s devastated by what David’s up to, and the family decide it’s time to confront him about his recent behaviour.

This isn’t going to end well, is it?!

Do you wish David would tell someone about what happened to him? Let us know by commenting on our Facebook page @EntertainmentDailyFix!