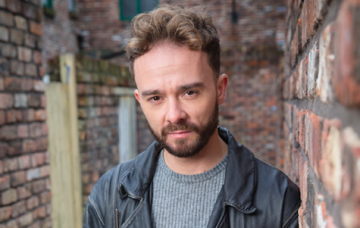 Should he stay or should he go?

David Platt has been through the worst experience imaginable so no one could blame him for wanting to escape, far away from all the reminders of what’s happened to him.

Not least the taunting face of his rapist, Josh.

He has been left so traumatised from the sexual assault that he thinks his only way of coping is to leave Coronation Street.

The young dad has recently connected with his own father, Martin, who is preparing for a new life with his pregnant partner in New Zealand.

And the prospect of disappearing Down Under himself started to look very appealing indeed to David.

So – bombshell – he wants to uproot the kids and Shona and go to.

Next week Martin visits Coronation Street, and he is intercepted by manipulative Josh, who tells him that David is angry that he is moving abroad.

David is furious that Josh has spoken to his dad. And he is determined that he is going to head to NZ with his old man.

It’s pretty obvious that neither the kids or Shona actually want to go though.

And, as everyone gathers to wave Martin off, David has a huge decision to make.

Will he really leave?

If you or a loved one have gone through a similar experience and would like to talk to someone in confidence, please visit survivorsuk.org

Are you happy to see Martin back? Let us know by commenting on our Facebook page @EntertainmentDailyFix!