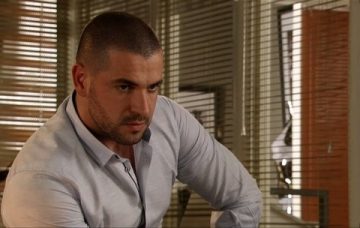 Summer would die of embarrassment if she found out!

Most of us can remember those first flushes of young love or our first ever heart-throbbing crush. (Bros, anyone?)

So it’s impossible not to empathise with young Summer in Coronation Street.

The poor girl has already had to endure more than your average kid, so it’s no wonder she’s been mooning over Aidan in her spare time…

After all, she is desperately seeing a stable father figure!

Next week, after being offered work experience at Underworld, Summer spots a mistake that Alya has made in the books.

Read more: Coronation Street spoiler: Double blow for Alya Nazir as she has the week from hell

She becomes hero of the hour when it’s revealed that Alya’s mistake could have cost Aidan thousands of pounds if it had gone unnoticed.

When Summer apologises to Alya for showing her up, thankfully Alya is fine about it and asks Summer for help on a new range of sportswear which they later pitch to Aidan.

But this inadvertently leads to Aidan finding Summer’s notebook – full of notes about how awesome he is – and he realises with horror that she has a MAJOR crush on him.

He doesn’t need any more drama at the moment, and Summer’s attentions are one thing he hadn’t bargained for.

Of course, Corrie fans have known about Summer’s crush for yonks – ever since her guardian Billy Mayhew went off to rehab to tackle his drug issues.

When Aidan confides in his dad Johnny about Summer’s crush, he says he’s going to get rid of the notebook to avoid any embarrassment. But is this the right thing to do?

And will Summer find out that Aidan knows? Oh, the embarrassment!

Do you think Aidan is overreacting? Leave us a comment on our Facebook page @EntertainmentDailyFix and let us know what you think!