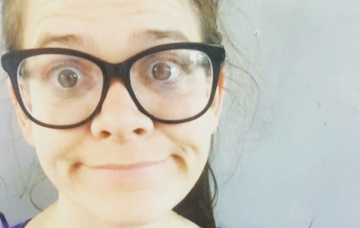 Hannah Ellis Ryan has confirmed she has joined Coronation Street.

The Australian actress, now living in Manchester, was reported to be joining the cast as Jim and Liz McDonald’s ‘dead’ daughter Katie.

Hannah showed her excitement at bagging a role in one of the world’s most popular soaps when she shared a behind-the-scenes snap with her 1,032 Instagram followers.

Alongside a photo of smiling Hannah in her dressing room – note to self, her character likes bright colours and florals – she wrote: “Well – now the news is out I can finally put some photo evidence on instagram.

“One of my first days filming – feeling incredibly lucky right now. Thank you to everyone for your messages and comments of support.”

And her friends and fans were quick to offer their congratulations, with one saying: “Smashing it Han!”

Another said: “When’s you on it then? I will, for the first time ever, watch corrie!!”

A third said it was “well deserved”.

Before Hannah has even appeared onscreen, however, her character Katie has become one of the most controversial in the history of the ITV soap (and that really is saying something).

The anger isn’t directed at Hannah, we’re sure she’s very nice, but fans are furious with the soap for resurrecting a ‘dead’ baby for a soap twist – and they’ve been very vocal about their disapproval.

Coronation Street scriptwriters have been heavily criticised over the plans to bring Liz and Jim’s daughter ‘back from the dead’.

And the news that the daughter is alive after all after a hospital mix-up hasn’t gone down well with soap fans – who have accused the scriptwriters of rehashing old stories and, above all, being insensitive.

Katie will arrive in Weatherfield with dad Jim, later this year.