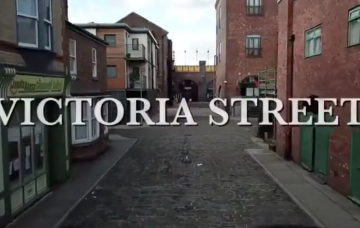 The Coronation Street Instagram account got into the spirit of April Fool’s Day, with a video trailer for a fake sitcom.

The video shows the opening credits for the fake show, using the Corrie set and actors.

The video pans through the streets before showing a title card saying “Victoria Street.”

A few of the Corrie cast show up, scampering around the set in stark contrast to the melodrama of their usual characters.

Julia Goulding frolics around with an umbrella, while Daniel Brocklebank dances up to the camera.

The video was captioned with a dramatic announcement for the fake show.

“EXCLUSIVE NEWS: @ITV is excited to announce a brand new sitcom based in Weatherfield, featuring well-known faces from the world of Coronation Street! #Corrie #VictoriaStreet #CoronationStreet”

Fans of the show were quick to cotton on to the ruse, taking to the comments to respond.

“Almost had me,” one fan commented. “I was getting so excited and then I was like…. Hold on a second, coronation street is massive and popular as it is, why do they need a sitcom about it 😂😂😂”

“Wish it was true it would be good,” said another fan.

“I was getting excited for a moment before I realised the date!!! That’s a cracker 😂,” another fan commented.

Did you get pranked today? Leave us a comment on our Facebook page @EntertainmentDailyFix and let us know what you think!