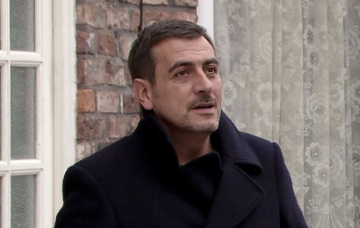 And it's not Carla

Coronation Street fans are predicting a shock affair will ripple through the cobbles.

They think Peter Barlow and Leanne Battersby will reunite for a shock romance once Toyah Battersby and Eva Price’s baby secret has been revealed.

Peter is currently in a relationship with Toyah, Leanne’s sister, and thinks baby Susie is his and Toyah’s biological child born via their surrogate.

However, viewers know Eva gave birth to Susie in secret, with her father being Aidan Connor.

It was recently claimed Peter would leave Toyah once he discovers the secret, but fans think there’s going to be a bigger shock coming when, in his devastation, Peter and Leanne jump into bed together again.

Read more: Corrie fans in bits ahead of next week’s shocking scenes

The pair already share a son, Simon, and have been previously married.

One fan wrote on DS Forums: “I’m thinking they might end up in bed after the baby reveal because Peter will be hurt, angry and upset about Toyah’s lies and I feel Leanne will feel betrayed her sister’s did this behind her back.

“They also seemed to have a bit of chemistry and closeness tonight and have had quite a few scenes together recently.”

A second added: “I can see Leanne siding with Peter when this comes out and disowning Toyah.

“I can imagine she will accuse Toyah of pushing Eva into giving the baby up, hate her for how it affects ‘OurSi’ and the lies to Peter.”

A third said: “Peter will definitely have a fling with either Carla or Leanne.”

Another added: “Peter and Leanne were a great couple. Can not wait for the end of Peter and Toyah.

“I have never seen such a lacklustre marriage proposal as the one last night.”

But could they really have a shock affair? Or will he find solace in the arms of another ex, Carla?

Do you think Peter will have a shock fling with Leanne? Leave us a comment on our Facebook page @EntertainmentDailyFix and let us know what you think!