Fans were fuming to miss out on their fave show

Corrie has been properly gripping the last few weeks.

David Platt’s horrifying ordeal at the hands of former friend Josh, Fiz and Tyrone’s marriage woes, Carla’s snog with Dr Ali, and the net closing in on Phelan has meant it’s been completely unmissable viewing.

So Corrie fans were furious last night as the soap was replaced with a football match!

England were playing Holland in a friendly match ahead of the World Cup in the summer but with EastEnders missing because of Sport Relief on the other side, soap fans were feeling like they were missing out.

And they didn’t hold back from sharing their feelings on social media.

“Hate it when Corrie is replaced with football,” said one disappointed fan. 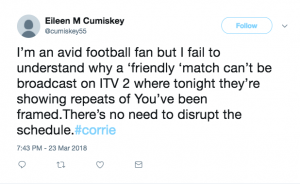 “I fail to understand why a ‘friendly’ match can’t be broadcast on ITV2,” suggested another. 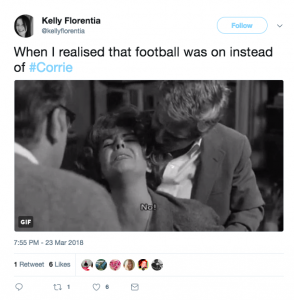 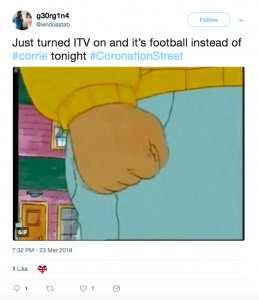 And some fans were more than annoyed. One viewer even said: “Absolutely devastated that corrie isn’t on.”

Though fans felt like they’d missed out, we were actually treated to an extra episode of the soap on Thursday ahead of the football.

It’s just with every episode being so exciting right now, it’s hard to wait three days until we can catch up with the events in Weatherfield!

Do you get annoyed when soaps are moved for football and other sporting fixtures? Let us know by commenting on our Facebook page @EntertainmentDailyFix!