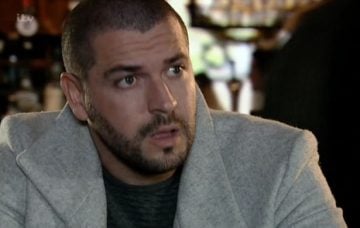 Aidan Connor’s dramatic departure is just around the corner, and speculation is rife about what happens to him.

But we can be almost certain of one thing, it’s doubtful he’ll have a happy ending…

In last night’s episode (Wednesday 25 April), Corrie scriptwriters gave their loyal fans another clue about Aidan’s state of mind as his behaviour continues to become curiouser and curiouser.

When Aidan discovered Summer’s notebook with clear evidence of her crush on him, the factory boss seemed to take it surprisingly seriously and hid the book to avoid embarrassing her.

In fact, in the double episode, even Carla and Kate picked up on it when they commented that he was becoming much more sensitive.

They asked: “Is our brother getting sickeningly sensitive and thoughtful?”

Aidan obviously knows something that we don’t…

Some of his recent behaviour has set off alarm bells for ITV viewers, including reacting oddly to being handed the factory by Carla. He should have been delighted as it had been his dream, but his reaction was lukewarm.

He also broke down in tears after donating his kidney to Carla.

Acting more and more withdrawn, he’s been seen hiding a letter and asking Kirk Sutherland to look after Beth Tinker, leading fans to believe he is hiding a mystery illness.

In upcoming scenes, Aidan causes more confusion by handing gifts to young Liam and Summer – including an expensive watch.

And this is all BEFORE he finds out that Eva Price is pregnant with his child – if he ever finds out.

Many fans believe Aidan is ill, while others believe he is depressed or in debt.

Shayne Ward, who has played Aidan for three years, has told us that his exit will be ‘shocking’.

He has already filmed his final scenes and left the soap.

How do YOU think Aidan leaves? Leave us a comment on our Facebook page @EntertainmentDailyFix and let us know what you think!