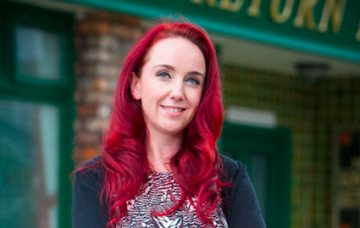 Kate Oates insists the show is in a good place

Corrie boss Kate Oates has been forced to defend the soap once again, after recent hard-hitting storylines have come under criticism.

Fans of the ITV soap have seen some dark storylines of late – with more to come, including David Platt’s devastating sexual assault and Pat Phelan’s continuing reign of terror.

While more viewers have been tuning in, the soap has come under fire for its dramatic scenes involving serial killers, drug addiction and a sex grooming gang.

However, Kate admits she tries to brush off the criticism, telling The Daily Star she’s sticking around no matter what people say…

She told the newspaper: “I’m not going anywhere. The show’s in a good place, the figures are up year on year.

“I’ve become more resilient to criticism. It drives me a little nuts but goes with the territory.”

Ofcom is currently investigating whether ITV breached guidelines on the pre-watershed show after receiving 622 complaints about the Pat Phelan storyline.

But the show chief, who took over in 2015, insists there’s still lots of humour in the long-running serial drama, too.

She added: “You can still get gallows humour, funny one-liners. Our writers are brilliant.’’

This week, crime writer Martina Cole – a lifelong Corrie fan – took aim at the soap accusing the TV show of being obsessed with violence.

She said: “For me the wonder days of Ken and Deirdre and Baldwin need to be revisited.”

Meanwhile, actress Sue Nicholls – who plays veteran Audrey Roberts – has said she understand why some fans are upset.

Fans have been divided about their fave soap, with one reacting to Kate’s comments by saying: “What she really means is ‘stuff everyone, I’ll do it my way’. This programme is no longer ‘family entertainment’.”

Appearing on BBC Breakfast on Thursday (15 March), Kate said: “Ultimately, the show has always dealt with issues that are noteworthy and promote discussion and that’s kind of the point.

“The point is that we raise issues and people talk about them and hopefully we can change opinions and make people think differently.”

Do you think Coronation has got too dark? Leave us a comment on our Facebook page @EntertainmentDailyFix and let us know what you think!