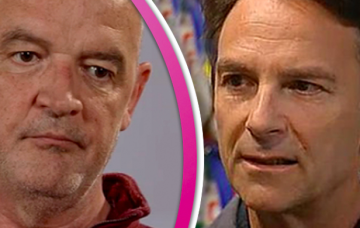 Who did bad best?

They’re both horribly villainous, with a body count that could make your toes curl. But which one of Coronation Street’s most infamous baddies is really more terrifying? And, more importantly, will it lead to a scene where wives Eileen Grimshaw and Gail Platt finally bond?

Cobbles Killer Richard Hillman was motivated by cold hard cash. He bumped off his ex-wife, Patricia, by smacking her in the face with a shovel as they argued about how much money he owed her from their business.

After marrying Gail, he then got wind of the fact his new MIL Audrey was worth a small fortune (£250,000 in fact) and tried to burn her alive in her own home.

That’s after he spends months gas lighting the pensioner and her family into thinking she’s suffering from Alzheimer’s. Ruthless!

Luckily (although not for Richard) Steve McDonald was on hand to pull Audrey out of the burning building. Rich’s next target was Emily Bishop and he tried to kill her with a crowbar while she was babysitting.

But he was interrupted by poor Maxine Peacock who got the crowbar wrapped round her head instead.

When Gail eventually called her husband out on his crimes – branding him Norman Bates with a briefcase – he lost the remaining few marbles he had and kidnapped the entire Platt family and drove them all into the canal.

Fortunately everyone managed to escape apart from Richard who met a very watery death.

Phelan is rotten to the core as we know from the past when – rather than killing folk – he blackmailed them into sleeping with him.

When Andy Carver rumbled him for being shady, he knocked him out and kept him prisoner for months in a dingy cellar. If Phelan had really wanted to kill just for killing’s sake, wouldn’t he have murdered Andy right away?

It was only when he realised his captive would never keep his secret that he knew he had to go, shooting him after forcing him to shoot Vinny Ashford. Luke Britton became Phelan’s next victim when he started meddling and almost uncovered the hidden bodies at the Mill.

Phelan is more of an accidental murderer rather than a calculating one, but he does seem to have a taste for blood now.

We’re gonna have to go with Phelan on this one. Even though he’s kind of fallen into the mass murderer role and he’s shown some genuine moments of humanity (those scenes with Summer and that tear when he disowned Nicola) his killings have been far more brutal than Richard’s.

Okay, so a spade in the face and a crow bar to the head aren’t exactly peaceful ways to meet your maker, but they seem almost slapstick now compared to Phelan’s double warehouse execution and the way he shot Luke’s petrol tank in.

We’d probably not want to run into either in a dark alley tbh, but Phelan is the one who really puts the fear in us.