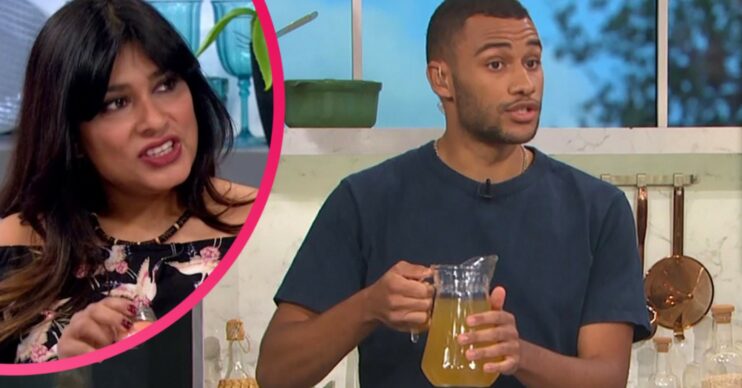 Cooking With The Stars on ITV: Meet the professional chefs

Cooking With The Stars is a brand new flagship cookery show on ITV1 with a batch of talented celebs and chefs.

They are each paired with a professional chef who will mentor them through one dish per week.

But who are they, and how did they become TV stars?

The Cooking With The Stars chef, 49,  has previously appeared on the likes of Lorraine and Sunday Brunch.

She began her career by starting her own chain called Mowgli Street Food.

Nisha has also been awarded an MBE for her services to the food industry.

She was previously a child protection barrister for 20 years and is married to her husband, Zoltan Katona.

She became known to many when she starred in the ITV series Ladette to Lady in 2005.

After becoming the breakout star, the mother-of-two bagged her own show titled Rosemary Shrager’s School For Crooks.

She is married to barrister Michael Shrager. The happy couple met when she was just 21.

The chef, 22, is best known as a regular guest star on This Morning.

Before his TV career, Joseph helped found the Bread and Butter Super Club.

The handsome ITV star has worked in top restaurants across London including Gabriel Waterhouse’s The Water House Project in Bethnal Green.

She is a Korean-American chef who has become a star in her home country.

Judy, 46, hosts her own show, Korean Food Made Simple, across the pond. She also stars in the popular cookery series, The Iron Chef.

However, she loves the UK and decided to start her own restaurant in London called Seoul Bird.

As a result, she regularly splits her time between New York and London.

Meanwhile, if you missed the show and aren’t sure whether to catch up, here’s what we thought about the first episode.

Will you be tuning in to Cooking with the Stars on ITV1? Leave us a comment on our Facebook page @EntertainmentDailyFix.

Cooking With The Stars ITV