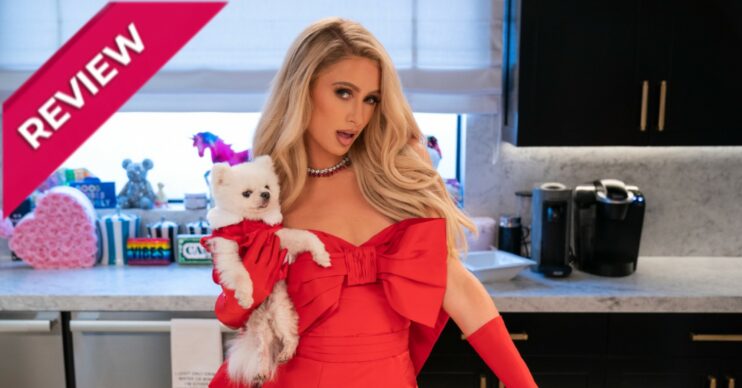 Cooking With Paris review: Is Paris Hilton’s Netflix cooking show hot or not?

The cooking chat show brings back an old favourite.

Netflix’s Cooking With Paris sees our favourite heiress turn hostess – with some celebrity pals along for the ride.

Back in 2003, Paris couldn’t last a day working at a drive-thru window on The Simple Life. Now? She’s making McDonald’s fries vegan-friendly from scratch… or trying to.

Thankfully, the pro party girl hasn’t changed that much. Everything is still pink, rhinestoned, and completely over the top. It’s a fantasy.

Paris admits from the start that she is not a chef ‘and isn’t trying to be’. As a result, Cooking With Paris and her bedazzled recipe book can be hit or miss.

But hey, she gives it a hell of a go – when the blender’s stopped smoking.

There is something gloriously sweet about Paris, who is definitely a woman of her own uber-privileged world, but means no harm in being there.

Yes, she trademarks words that make no sense. Yes, she doesn’t know her way around her own kitchen. And yes, she will pay for party planners to spend thousands on a themed banquet for two.

For the sake of this series, it’s Paris’s world and we’re all living in it.

While attempts at making food are fun, the one thing the series needs is a little in-depth time with her pals.

Seeing Paris try and figure out how to cook with Demi Lovato is fun, it feels like we only get a taster of their conversation as they sit down for food at the end.

Read more: Paris Hilton is pregnant – who is fiancé and baby daddy Carter Reum and what does he do?

We also don’t get to know Paris much. Here she is in her 40s, ready to become a wife and settle down. But we never see her husband-to-be, or even much of a day in her life.

What is cute though, and the one thing we learn, is Paris discussing her desire to be a mother. It’s something made more heartwarming by reports she’s now expecting her first child.

Is Cooking With Paris worth watching?

Cooking With Paris is a more mature side of Paris Hilton, but still comes with that added sparkle that makes the reality party princess so charming.

Coming in at six episodes, it’s a pure comfort watch, giving a unique insight into the world of the elite that most can barely imagine.

But Swarovski crystal-covered spatulas aside, the series misses substance amid the style, with conversations skimming the service of it’s potential. It’s a shame, we’d love to be a fly on the wall of an in-depth chat between Paris and Kim K.

We’re not completely convinced the concept is fully baked, but we have absolutely no doubt that fans of the starlet will be ‘sliving’ for it.